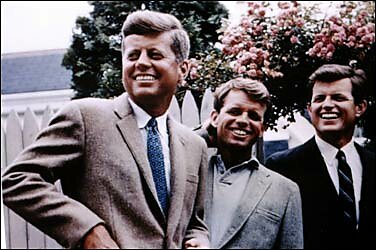 My DC Examiner column this week looks at the controversy surrounding the History Channel's forthcoming miniseries, "The Kennedys," starring Greg Kinnear and Katie Holmes as JFK and Jackie.  It's controversial in large part because the producer is "24"'s Joel Surnow, who is cigar-buddies with Rush Limbaugh and an outspoken conservative:

The screenwriter, Stephen Kronish, insists that he's "not out to destroy the sacred cow" of the JFK presidency. Too bad: In an age when Americans still periodically swoon for imperial presidents, a little sacred-cow tipping would be a public service.

Robert Greenwald, a left-wing documentarian who read an early version of the script, is leading the fight to discredit the project. Greenwald seems especially troubled by the (largely true) allegations about Kennedy's Tiger-Woodsish sex life.  But I argue that:

More troubling were Kennedy's routine abuses of power. His attorney general, brother Bobby, ordered wiretaps on New York Times and Newsweek reporters, along with various congressmen and steel executives who'd had the nerve to raise prices. At JFK's instigation in 1961, the Internal Revenue Service set up a "strike force" aimed at groups opposing the administration. Nixon's defenders had half a point when they complained that the sainted Jack had gotten away with the sort of abuses that brought Nixon's own downfall.

Worse still is how the persistent longing for Camelot has distorted Americans' views of the presidency's proper role:

Presidential biographer James MacGregor Burns, a Kennedy fan, wrote that "the stronger we make the Presidency, the more we strengthen democratic procedures." Even today, far too many pundits and historians seem to get a Chris Matthews-style "thrill up [their] leg" when they contemplate "heroic" presidential activism.

Peggy Noonan called Bush's post-9/11 address to Congress "a God-touched moment and a God-touched speech." Fred Barnes wrote that "the stage was set for Bush to be God's agent of wrath." National Review Online ran ads for the Bush "Top Gun" action figure, and an article about how wonderful it was to have a presidential superhero to complement your GI Joe collection.

And even the What Would Reagan Do? stuff smacks of the “man on horseback” dream of the presidency that’s caused us so many problems.  In fact, Surnow, "the Kennedys" producer, seems to have an unhealthy case of Gipper-worship himself.  He told the New Yorker:

“I can hardly think of him without breaking into tears. I just felt Ronald Reagan was the father that this country needed… . He made me feel good that I was in his family."

If more people felt embarrassed to talk about presidents that way, we'd be well on our way to putting the presidency back in its proper constitutional place.