The Constitution? Not That Old Thing! 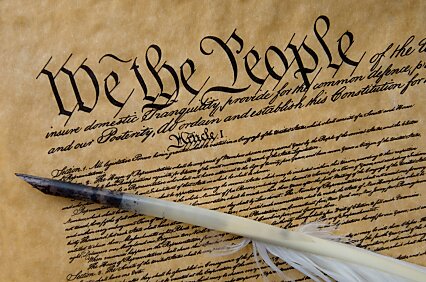 Over at Flypaper, Andy Smarick can’t figure out what the Obama administration thinks is the proper federal role in education.


A couple of weeks ago, commenting on a speech by U.S. Secretary of Education Arne Duncan, Smarick couldn’t tell whether Duncan was advocating that the feds be friendly Helpy Helpertons, no‐​excuses disciplinarians, or something in between. Yesterday, Smarick revisited the whither‐​the‐​feds theme, pointing out the frustrating contradiction when Duncan both praises local and state education control and blasts states for doing stuff he doesn’t like.


But Duncan isn’t alone in his fuzziness, according to Smarick, who says he’s “yet to come across anyone with a comprehensive, water‐​tight argument for what the feds should and should not do.”


I’m sure this is not the case, but from reading that you’d think Smarick had never run across a little thing called “the Constitution,” which furnishes just the “water‐​tight argument for what the feds should and should not do” that he seeks. It also appears that he’s never encountered numerous things that I’ve written pointing this out. For instance, in Feds in the Classroom I wrote:

Because two of the sundry words that do not appear among the few legitimate federal functions enumerated in the Constitution are “education” and “school,” the federal government may have no role in schooling.

Ah, but what of the “general welfare” clause that comes before the enumerated powers in the Constitution’s Article I, Section 8? Doesn’t that give the feds authority to do anything that is in the nation’s best interest? At the very least, doesn’t it break the water‐​tight seal against federal education intervention?


Nope. I give you James Madison on the general welfare clause in Federalist no. 41:

For what purpose could the enumeration of particular powers be inserted, if these and all others were meant to be included in the preceding general power? Nothing is more natural nor common than first to use a general phrase, and then to explain and qualify it by a recital of particulars.

The general welfare clause confers no authority on the federal government, it just introduces the specific, enumerated powers that follow it. Among them, you’ll find not a peep about education.


Many educationists will think me hopelessly retrograde for bringing up the Constitution, although Duncan at least mentioned the dusty old document in his recent federalism speech. Unfortunately, he engaged it with all the courage and gusto of Sir Robin. But at least he acknowledged its existence — too many policymakers and wonks ignore the Constitution completely because it forbids Washington from doing the sundry things they want it to do.


But why shouldn’t the Constitution be treated like an ancient grandfather, a nice old guy whose utterances, in a half‐​hearted effort to be respectful, we acknowledge in the same tone we’d use with a toddler and then promptly ignore?


Because it is the Constitution that clearly establishes the bounds of what the federal government can and cannot do, that’s why! And because when we ignore the Constitution we get exactly the sort of government that is confounding Smarick: government that is capricious, often incoherent, and is ultimately an existential threat to freedom because government officials can claim power without bounds. See TARP, campaign finance, and executive pay for just a few examples of this last threat coming to fruition.


Which leaves all of the people who want Washington to have some role in education, but are frustrated by not knowing what else the feds might do, with only one choice. They can either continue to face inscrutable and ultimately unlimited federal power in hopes of getting what they want, or they can acknowledge what they keep choosing to ignore: That the Constitution is the supreme law of the land, and it gives the federal government no authority to govern American education.