A new poll conducted for The Hill found that 67 percent of likely voters think members of Congress should take a pay cut. With the economy still struggling and the government’s debt continuing to mount, congressional pay is — understandably — a sore subject with voters. However, I get the impression that a lot of people think that cutting Congress’s budget would have a sizable impact on the government’s financial situation.


The following chart shows fiscal 2011 spending for the House and Senate, the entire legislative branch, and the entire government: 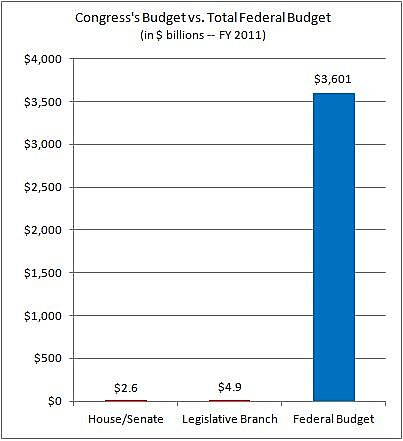 Spending for the House and Senate, which includes salaries, mailings, and committee expenses, represents only .07 percent of total federal spending. The entire legislative branch includes additional expenses for the Government Accountability Office, the Congressional Budget Office, the Library of Congress, and other functions that can be viewed here. It only amounts to .14 percent of total federal spending.


Please do not take this post to mean that I believe that congressional pay is completely unimportant. The point is that congressional pay is relatively unimportant when measured against the overall size of the federal budget. Therefore, I think those readers who are concerned about government spending and debt should focus their attention on considerably larger problems like Social Security, Medicare, and military spending.