A quick primer: congressional spending is a two-step process. First, there must be an authorization of appropriations. Then Congress appropriates funds, providing actual authority for executive branch agencies to spend.

The committees in Congress are divided by type between authorizing committees and appropriations committees. Authorizers are supposed to do the bulk of the oversight and authorize spending at amounts they determine. Appropriators would then dole out funds specifically. But over the years, the division of labor has shifted and power has collected in the appropriations committees, whose members are often referred to as "cardinals" ... like "College of Cardinals."

Backward incentives explain this. Members of Congress who authorize spending naturally appear to be pro-spending, which has political costs. The costs are at their worst when a specific amount is involved. "Senator So-and-So wants to spend $50 million on what?!" So many authorizing committees shirk their duties by eschewing reauthorization of the agencies in their jurisdiction. And sometimes the trick is authorizing spending of "such sums as may be necessary," which doesn't provide as good an angle for political attack. 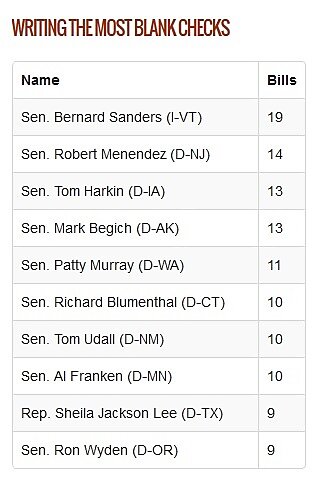 That would make appropriators the only drag on spending, but it doesn't because of a second perversion in politics. Appropriators get good enough at gathering the political emoluments of spending that they overcome the negatives and become an institutional pro-spending bloc. As Mike Franc of the Heritage Foundation put it in 2011, "appropriators, their professional staff, and legions of lobbyists serve as a mutually reinforcing triad bent on increasing spending today, tomorrow, and forevermore."

Rosiak notes that the House Republican leadership cautioned against open-ended spending proposals at the beginning of the 113th Congress. Consequently, Republican blank-check bills are more rare. The top open-ended spenders are all Democrats, and they're all on the party's left wing.

So what's to be done?

In 2010, the Senate joined the House in banning earmarks. This came after a few short years of applied transparency in the earmark area, including a contest to gather earmark data conducted by yours truly on WashingtonWatch.com. A group called Taxpayers Against Earmarks (now Ending Spending) applied some direct pressure. And a host of other groups were involved, of course.

The practice of proposing open-ended spending could similarly be curtailed with public oversight and pressure.

So who should do that work?