Last week the Senate voted to greatly increase health care spending for veterans. If the new spending were made permanent, it would cost at least $385 billion over 10 years, as Nicole Kaeding noted. The House version of the bill would cost at least $477 billion if made permanent. The chambers will now work out a compromise bill, and—going out on a limb here—I’m guessing that the compromise is also a budget buster.


The bills would allow veterans to access health services from facilities outside of the Veterans Affairs (VA) system. The VA system needs a fundamental overhaul, but these bills would appear to just throw money at the problem without creating structural reforms.


The CBO score for the Senate bill is here and for the House bill here. For the House bill, CBO says spending would be $16 billion in 2015 and $28 billion 2016. The House bill would authorize the new spending until 2016, but if Congress extends it permanently the total costs would be $54 billion a year and about $477 billion over 10 years.


I can’t remember an instance when Congress has voted so quickly to spend so much money with so little debate and analysis. The CBO cautioned that their numbers are essentially only rough guesses. So the ultimate spending could be even higher than shown in the chart. 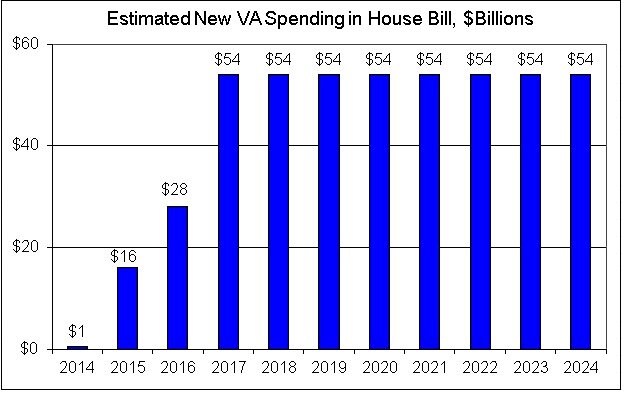