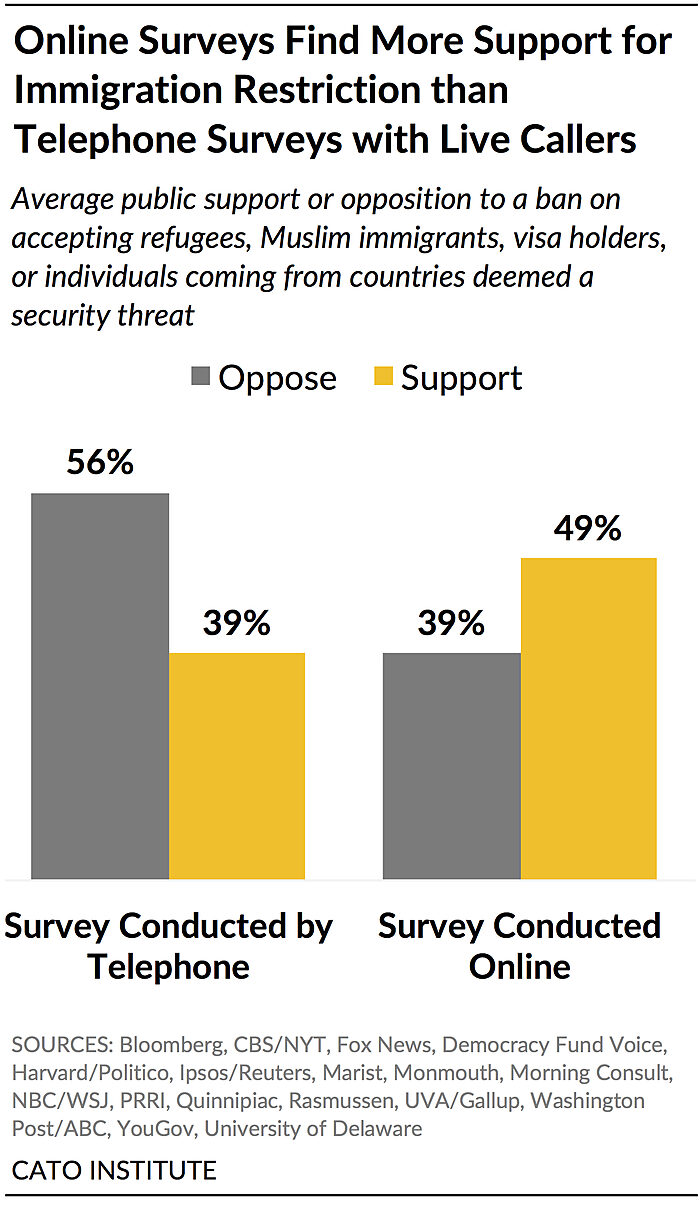 As Henry Enten notes, we’ll have to wait until we have more polling data to ascertain how the public will judge the action, but polling over the past year gives us some clues.

Slim but Shy Support Most polls throughout 2015-2016 found about 56% of Americans opposed Trump’s call to temporarily ban Muslim immigrants from entering the United States. However, these polls tended to be conducted by live telephone interviewers. In contrast, polls conducted online by reputable firms like YouGov and Morning consult, find a plurality of Americans in support.

Aggregating over 40 telephone and online polls conducted over the past two years finds Americans opposed to the ban 56% to 39% in surveys conducted by phone, but a plurality in support 49% to 39% in surveys conducted online. This suggests that people taking surveys by phone feel uncomfortable sharing their true feelings and thus fib to the live interviewers. But, privately taking a survey online encourages people to share what they really think. In the polling world, this is called “social desirability bias” evoked by social pressure to not appear prejudiced to the live interviewer.

Of course, the difference cannot be entirely attributed to survey mode since the questions weren’t worded the exact same way. Nonetheless, it’s suggestive that there is a “shy immigration restrictionist” effect going on. (Remember the shy Trump voter?)

Americans Don’t Support an Outright Ban on Refugees Existing data suggest Americans do not support a permanent ban on refugees. Most telephone and online surveys found that Americans oppose not taking any refugees at all and a plurality (46%) say the “US should open our borders to refugees of foreign conflicts” according to an Ipsos/Reuters Jan 2017 online survey. At the same time, Americans tend to support taking fewer refugees rather than more, when given the option. For instance, both an Ipsos/Reuters Jan 2017 online survey and a Marist Apr 2016 telephone survey found 53% of Americans want the US to take in fewer refugees.

Wording Impacts Support Strength As you can imagine, survey question wording impacts responses. Support for immigration restriction increases when refugees and immigrants are described as coming from “terror prone regions” or when respondents are told that government needs time to enhance security measures. For instance, Rasmussen, measures the highest degree of support (57%) when it asked if respondents support or oppose a “temporary ban on refugees from Syria, Iraq, Iran, Libya, Somalia, Sudan, and Yemen until the federal government improves its ability to screen out potential terrorists from coming here.” This question presupposes the government screening system is already poor and the new administration could meaningfully improve it. If these are the assumptions going in, support will be higher. When national security concerns are invoked and at the top of people’s minds they are more supportive of immigration restrictions.

Support for immigration restriction decreases, however, when the described policy implies a religious test. Surveys register lower support (48%) if the policy is described as a “temporary ban on all Muslims traveling to the United States” (from Morning Consult).

Support Changes with Global Events We find that support for accepting refugees and immigrants varies with what’s happening in the news and the level of threat Americans perceive. For instance, support for banning refugees jumped from 24% in September 2015 to 38% in December 2015 after the San Bernardino attack, two NBC/WSJ telphone surveys found.

Support for a Temporary Immigration Ban Varies by Country of Origin A Morning Consult survey found that majorities of Americans support a “temporary ban on immigration” from Syria (56%), Iraq (55%), and Libya (53%). However, less than half support such a ban on immigrants from Egypt (46%), and Mexico (46%). This indicates that security fears associated with particular countries are an important factor behind people’s attitudes. 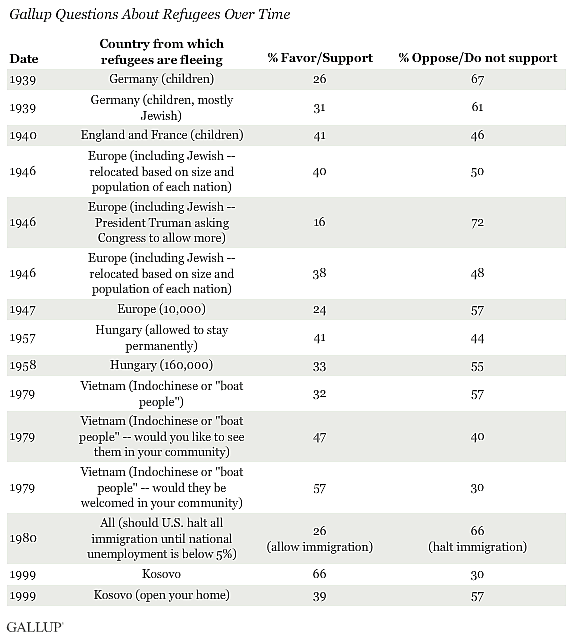 Americans are Conflicted A new report published by Democracy Fund Voice, Stranger in My Own Country, finds that Americans are conflicted over immigration. Longform interviews and a national survey (conducted online) found that Americans believe that our country is a melting pot, a nation of immigrants, but at the same time expressed concern that immigration from certain regions could pose a security threat and could also risk changing the culture of America.

For instance, looking at President Donald Trump’s core supporters, we find that 66% agreed that “we should follow the Golden Rule and treat others as we’d like to be treated, including people of different races, and countries.” Moreover, 4 in 10 also expressed concern that anti-immigrant sentiment could lead to violence against immigrants residing in the U.S. At the same time 58% feared that “America’s culture has been influenced by other cultures too much” and 78% felt the US was far less safe from foreign threats compared to when they were growing up.

Similarly among Americans overall, a Marist Apr 2016 survey found that a plurality (50%) of Americans thought the U.S. was morally obligated to take in refugees. But in the same survey, 53% also revealed they thought the US should “take in fewer refugees than it does now.” 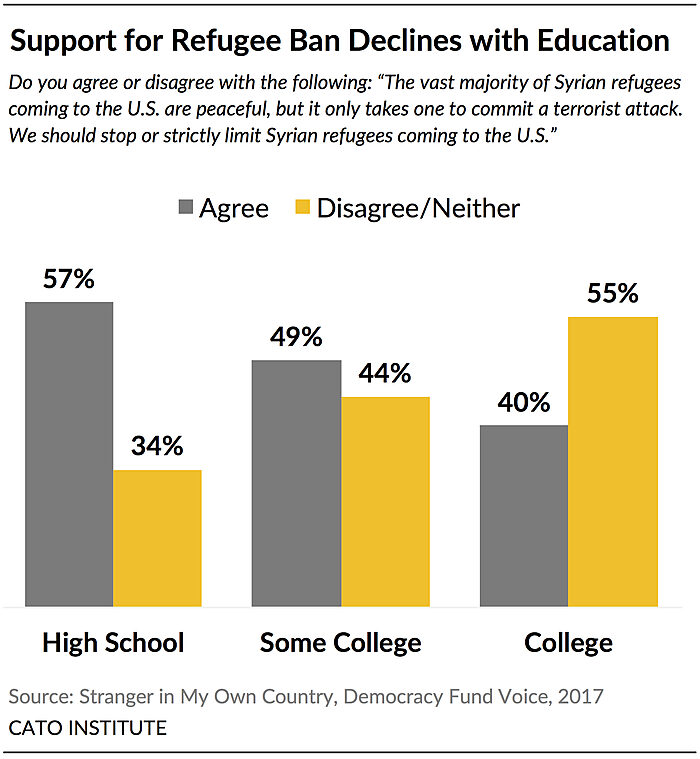 We find that concerns over immigration tend to decline as people attain higher levels of education. For instance, the Democracy Fund Voice report found that Americans with more education were far less likely to agree that the US should “stop or strictly limit Syrian refugees coming to the US.” Among those with high school diplomas, 57% thought the US should limit or stop accepting Syrian refugees, compared to 49% of those with some college experience, and 40% with college degrees.

In a media experiment I ran for the Democracy Fund Voice report, I found that videos and print media that conveyed the following significantly reduced fears over immigration and increased support for accepting Syrian refugees: showing that immigrants want to join the American way of life rather than change it, are relatable, and once they get here think of themselves as patriotic Americans. Furthermore, showing the harmful consequences of prejudice also calmed fears over immigration. For instance, this video of Muslim American millennials reading mean Facebook comments increased favorability toward Muslim Americans from 34% in the control group to 52% in the treatment group, an 18-percentage point change. Among strong Trump supporters, favorable attitudes increased from 11% to 38%, a 27-percentage point change. 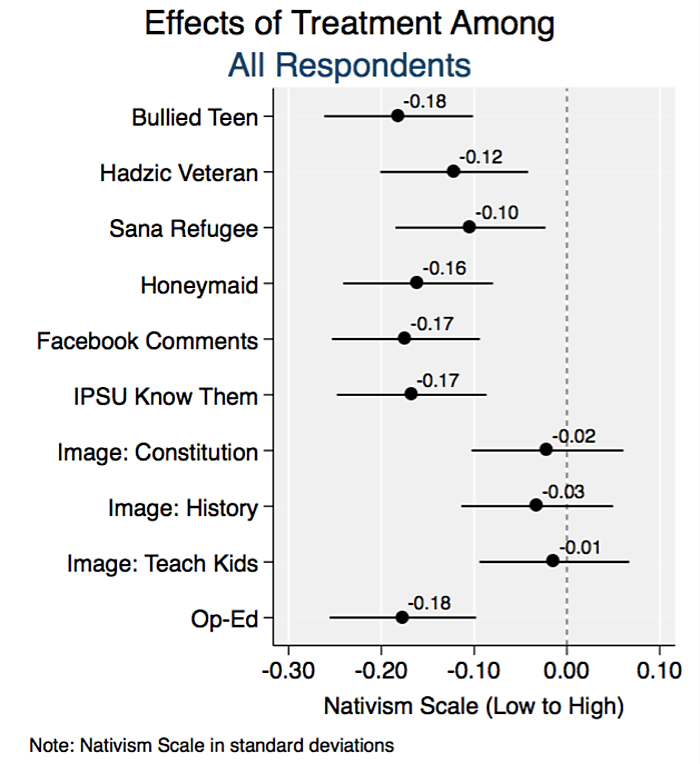 The chart to the right presents more results from the experiment finding a variety of different digital and print media significantly reduced nativist attitudes among respondents.

In sum, online surveys reveal Americans are concerned about the national security risks they believe might result from the U.S. accepting refugees and immigrants from Syria, Iraq, Iran, Libya, Somalia, Sudan, and Yemen. However, Americans are unlikely to support a permanent ban on accepting refugees into the US. Support for immigration restriction increases when the issue is framed around national security risks and giving the government additional time to enhance security measures. However, support declines if such a policy is framed as a religious test for entry into the country.

The difference between telephone and online polls should trouble both journalists and policymakers alike. If Americans feel they cannot express their true opinions on important policy matters it makes it difficult for journalists, policy experts, and lawmakers to respond to these opinions, and at times push back. People won’t have a chance to change their minds if they keep their opinions to themselves and thus no one can provide countervailing evidence.

In addition, political elites would be unwise to assume that these views are simply due to nativism, xenophobia, or some other label. Some people are driven by such concerns, but others are unclear of the risks posed by refugees and immigrants from war-torn countries. Evidence suggests that respectfully explaining the risks, benefits, and showing that immigrants assimilate into US society can effectively persuade people (although not all people) to consider a more liberalized immigration policy.