Competition Is Healthy for Public Schools

As more North Carolina families are using school vouchers, enrolling their children in charter schools, or homeschooling, some traditional district schools are experiencing slower growth in enrollment than anticipated. The News & Observer reports:

This growth at alternatives to traditional public schools has accelerated in the past few years since the General Assembly lifted a cap on the number of charter schools and provided vouchers under the Opportunity Scholarship program for families to attend private schools.

Opponents of school choice policies often claim that they harm traditional district schools. Earlier this year, the News & Observer ran an op-ed comparing choice policies to a "Trojan horse" and quoting a union official claiming that "public schools will be less able to provide a quality education than they have in the past" because they're "going to be losing funds" and "going to be losing a great many of the students who are upper middle-class... [who] receive the most home support."

Setting aside the benefits to the students who receive vouchers or scholarships (and the fact that North Carolina's vouchers are limited to low-income students and students with special needs), proponents of school choice argue that the students who remain in their assigned district schools benefit from the increased competition. Monopolies don't have to be responsive to a captive audience, but when parents have other alternatives, district schools must improve if they want to retain their students. But don't take their word for it. Here's what a North Carolina public school administrator had to say about the impact of increased competition:

New Wake County school board Chairman Tom Benton said the district needs to be innovative to remain competitive in recruiting and keeping families in North Carolina’s largest school system. At a time when people like choice, he said Wake must provide options to families.

“In the past, public schools could assign students to wherever they wanted to because parents couldn’t make a choice to leave the public schools,” Benton said. “Now we’re trying to make every school a choice of high quality so that parents don’t want to leave

Wake County is not unique in this regard. As I've noted previously, there have been 23 empirical studies investigating the impact of school choice laws on the students at district schools. As shown in the chart below, 22 of those studies found that the performance of students at district schools improved after a school choice law was enacted. One study found no statistically significant difference and none found any harm. 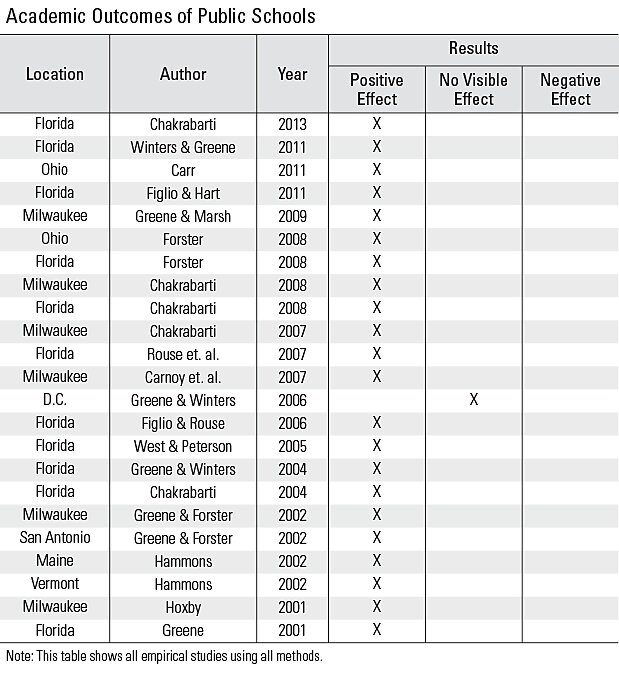 Beating district schools over the head with more and more top-down regulations has done little to improve quality. A better approach is bottom-up: empower parents with alternatives and give district schools the freedom to figure out how to provide a quality education that will persuade parents to choose them.

[Hat tip to Dr. Terry Stoops of the John Locke Foundation for the story from New Wake County.]