Ronald Reagan would have been 100 years old on February 6, so let's celebrate his life by comparing the success of his pro-market policies with the failure of Barack Obama's policies (which are basically a continuation of George W. Bush's policies, so this is not a partisan jab).

The Federal Reserve Bank of Minneapolis has a fascinating (at least for economic geeks) interactive webpage that allows readers to compare economic downturns and recoveries, both on the basis of output and employment.

The results are remarkable. Reagan focused on reducing the burden of government and the economy responded. Obama (and Bush) tried the opposite approach, but spending, bailouts, and intervention have not worked. This first chart shows economic output. 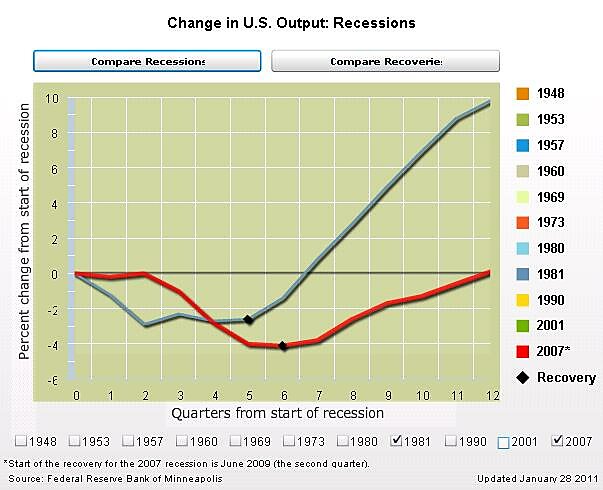 The employment chart below provides an equally stark comparison. If anything, this second chart is even more damning since employment has not bounced back from the trough. But that shouldn't be too surprising. Why create jobs when government is subsidizing unemployment and penalizing production? And we already know the so-called stimulus has been a flop. 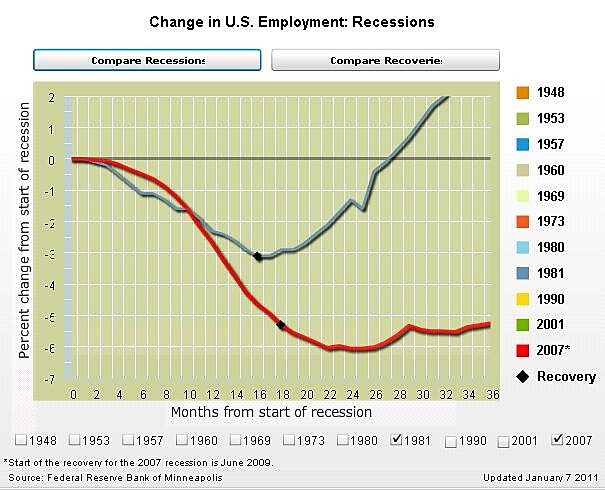 None of this should be interpreted to mean Reagan is ready for sainthood. He made plenty of compromises during his eight years in office, and some of them were detours in the wrong direction. But the general direction was positive, which is why he's the best President of my lifetime.*

*Though he may not be the best President of the 20th Century.