As a follow-on to my post yesterday, I've been working on two charts using data from the International Institute of Strategic Studies to compare U.S. military spending with that of our European allies. I'm grateful to Charles Zakaib for his help crunching the numbers.

I think that the charts are pretty evocative.

The chart below combines data showing the growth of U.S. defense spending (DoD only) as a share of GDP, and a corresponding decline among all other NATO countries. Please note that NATO member states are supposed to spend at least 2 percent of GDP on defense.

The second chart shows changes in defense spending per capita over the same period. I've always thought this figure more instructive than spending as a percent of GDP. You can see that Americans are spending much more on our military over the past 10 years, whereas most of our European allies have made only modest increases. 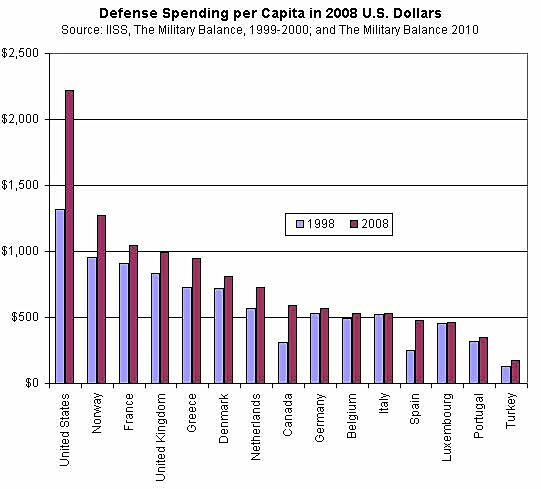 These charts aren't perfect because there are some inconsistencies in the data. Different countries include different things under "defense" and this can lead to misunderstating what they spend relative to others, including the United States. For example, the figures for France, Germany, Italy, Spain, Greece, Belgium and Portugal include military pensions, but other countries do not. The stats for other countries (Turkey, Albania, Canada, Denmark, Estonia, Iceland, Luxembourg, Romania and Slovenia) count coast guards and/or gendarmerie (aka national police) under defense spending, but in the United States some of those costs are covered under the Department of Homeland Security (especially the Coast Guard; we obviously don't have a federal police force).

Using IISS data (shown below), I conclude that a comparable figure for U.S. national security spending, broadly defined, totaled $835.1 billion in 2008. That translates into over $2,700 per person, and is 5.88% of GDP.

One could quarrel with my including all of the DHS budget as "national security spending." Others might dispute that all of the VA’s budget should be counted. But while I might have misconstrued a detail here or there, the bottom line is clear: the gap between what we spend, and what others spend, is growing. The open question is what, if anything, we are prepared to do about it.