The doctrine that inflation can cure unemployment, implicit in the Obama administration’s spending blowout, goes way back.


The modern version originated with William Phillips, a New Zealand‐​born economist who, in 1958, wrote a paper modestly titled “The Relation between Unemployment and the Rate of Change of Money Wage Rates in the United Kingdom, 1861‑1957.” Phillips suggested that when inflation went up, unemployment went down. Keynesian economists Paul Samuelson and Robert Solow popularized Phillips’ idea as a reason to ratchet up government spending and inflate the money supply. That’s what the Kennedy and Johnson administrations did during the 1960s.


In 1967, Milton Friedman expressed a skeptical view about what had come to be known as the Phillips Curve, launching an extended debate. Then in 1973, President Richard Nixon, who had famously declared “I am now a Keynesian,” leaned hard on Fed Chairman Arthur Burns to inflate the money supply and drive down unemployment, hopefully to improve Nixon’s prospects for re‐​election. Well, as those of us who were around back then recall, both inflation and unemployment went up! This was a bit of a problem for Phillips Curve aficionados.


As if the stubborn stagflation of the 1970s wasn’t bad enough, subsequent efforts by new Fed Chairman Paul Volcker and President Ronald Reagan to stop inflation cold delivered another hammer blow against the Phillips Curve: both inflation and unemployment went down!


There shouldn’t have been any surprise about Obama’s flop, since the underlying idea – the Phillips Curve – proved to be a dud long ago. This would be a good time to review experience with the Phillips Curve.


Thankfully, Cato Adjunct Scholar John H. Cochrane, the AQR Capital Management Distinguished Service Professor of Finance at the University of Chicago Booth School of Business, has done just that. He focused on the period from 1966 to the present. That year, President Lyndon Johnson was going full bore, promoting runaway spending on new entitlement programs and on the Vietnam war simultaneously, and inflation reared its ugly head. 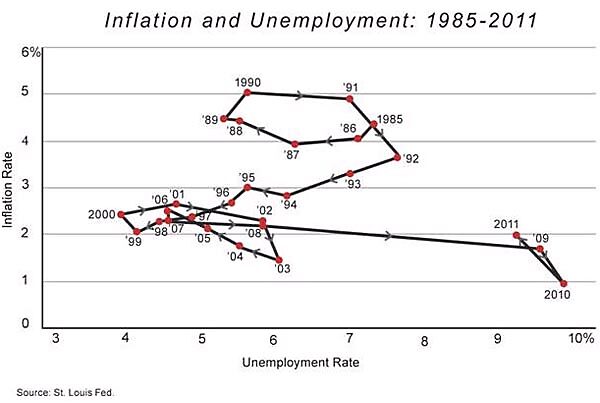 The charts appear in an insightful article Cochrane wrote, published in the Fall 2011 National Affairs. The article is important quite apart from the Phillips Curve charts. Although the prevailing view seems to be that high inflation is most likely to occur if and when the Fed increases the money supply, Cochrane warns high inflation could occur as a consequence of soaring government debt. Such inflation would amount to a default. It would be triggered by a run on dollar‐​denominated assets, if and when investors conclude that the government cannot pay its debts. Runs occur without warning, often after a succession of events have undermined investor confidence.