Class Warfare Tax Policy May Be Emotionally Satisfying to Some People, but It Is Bad Economics

Barack Obama wants higher tax rates on the so‐​called rich, including steeper levies on income, capital gains, dividends, and even death. Along with other politicians in Washington, he acts as if successful taxpayers are like sheep meekly awaiting slaughter. I’ve explained in this video why class‐​warfare tax policies are misguided, and a new study from Boston College provides additional evidence about the consequences of hate‐​and‐​envy tax policy. The research reveals that high tax rates in New Jersey have helped cause wealthy people to leave the state, leading to a net wealth reduction of $70 billion between 2004 and 2008. Wealth and income are different, of course, so it is worth pointing out that another study from 2007 estimated that the state lost $8 billion of gross income in 2005. That’s a huge amount of income that is now beyond the reach of the state’s greedy politicians. Here’s a report from the New Jersey Business News:

More than $70 billion in wealth left New Jersey between 2004 and 2008 as affluent residents moved elsewhere, according to a report released Wednesday that marks a swift reversal of fortune for a state once considered the nation’s wealthiest. …The exodus of wealth…was a reaction to a series of changes in the state’s tax structure — including increases in the income, sales, property and “millionaire” taxes. …the report reinforces findings from a similar study he conducted in 2007 with fellow Rutgers professor Joseph Seneca, which found a sharp acceleration in residents leaving the state. That report, which focused on income rather than wealth, found the state lost nearly $8 billion in gross income in 2005. …Ken Hydock, a certified public accountant with Sobel and Company in Livingston, said in this 30‐​year‐​career he’s never seen so many of his wealthy clients leave for “purely tax reasons” for states like Florida, where property taxes are lower and there is no personal income or estate tax. In New Jersey, residents pay an estate tax if their assets amount to more than $675,000. That’s compared to a $3.5 million federal exemption for 2009. Several years ago, he recalled, one of his clients stood to make $60 million from stock options in a company that was being acquired by another. Before he cashed out, however, the client put his home up for sale, moved to Las Vegas, and “never stepped foot back in New Jersey again,” Hydock said. “He avoided paying about $6 million in taxes,” he said. “He passed away two years later and also saved a huge estate tax, so he probably saved $7 million.”

Still not convinced that high tax rates are causing wealth and income to escape from New Jersey? The Wall Street Journal wrote a very powerful editorial about the Boston College study, noting that New Jersey “…was once a fast‐​growing state but has now joined California and New York as high‐​tax, high‐​debt states with budget crises.” But the most powerful part of the editorial was this simple image. Prior to 1976, there was no state income tax in New Jersey. Now, by contrast, highly‐​productive people are getting fleeced by a 10.75 percent tax rate. No wonder so many of them are leaving. 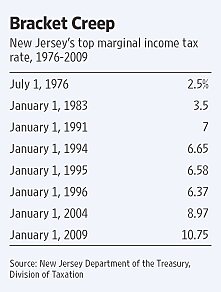