I’ve written before about the worrisome gap between the American people and foreign policy elites (see e.g. here and here). Whereas most Americans believe that the U.S. military exists chiefly to defend the United States and its economic and security interests, the intelligentsia is committed to a broader set of objectives, including defending the security of others, shaping the international system, and advancing the cause of democracy and human rights. These slightly differing impulses often worked hand in hand. A large and active U.S. military that was focused mostly on U.S. security and prosperity typically helped others.


But that wasn’t always the case. And military interventions initiated with lukewarm public support (e.g. Somalia 1993), or sold on phony pretenses (e.g. Iraq 2003), eventually subjected the men and women responsible for these debacles to closer scrutiny. As I explain over at The National Interest:

Trump exploited the gap between the elites and the public at large with ruthless efficiency on his path to the GOP nomination, and then in his general election win over Hillary Clinton. As president, his rhetoric has continued to shine the light on the public vs. elite divide, though his actions have largely conformed with the primacist consensus.


Increasingly, however, we see not merely a disconnect between the public and elites, but also among different age groups within the American electorate. And the age cohort most skeptical of American global leadership, at least as it has been practiced for the last several decades, is the Millennial Generation, those men and women born between 1981 and 1996. These individuals did not arrive at their views because of Donald Trump; a majority of voters under 45 voted for Hillary Clinton.

Earlier this week, Cato hosted a policy forum exploring the generational divide and centering on a new report by the Chicago Council on Global Affairs. The event featured three of the authors of this report: the Chicago Council’s Dina Smeltz, Cato Senior Fellow and GMU Professor Trevor Thrall, and William Ruger of the Charles Koch Institute, and also included a lively and wide‐​ranging discussion.


Going back to 1947, the Chicago Council has asked Americans “Do you think it will be best for the future of the country if we take an active part in world affairs or if we stay out of world affairs?” The percentage of those answering “active part” has averaged in the high 60s/​low 70s. 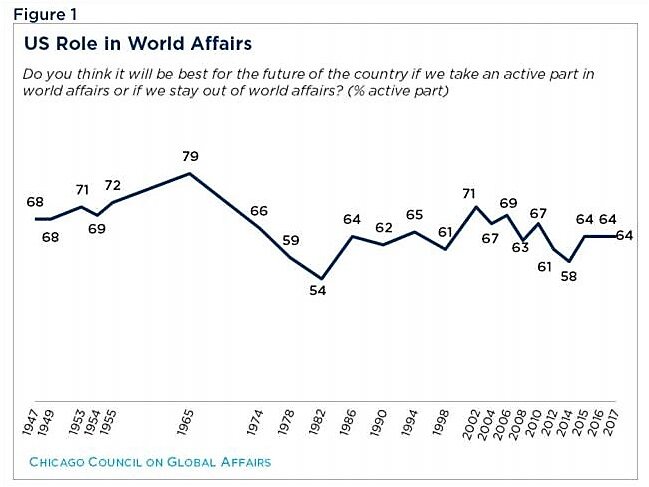 When one separates respondents by their age cohorts, however, the generational divide becomes clear. The Silent Generation, those men and women born between 1928 and 1945, are most supportive of an active role (78 percent in the latest survey). Baby Boomers (born between 1946 and 1964) are slightly less supportive (72 percent), and Generation X (1965–1980) less “active” still (62 percent). Barely a majority of Millennials (51 percent) embrace the “active” over “stay out” approach. 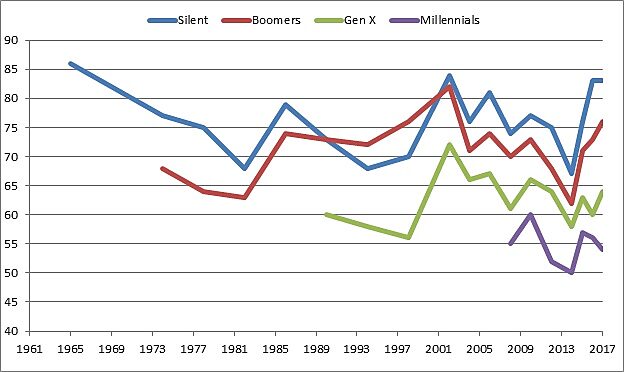 But, as I explained in my introductory remarks, and then expanded upon at TNI, Millennials don’t want to disengage from the world – rather, they want to engage differently:

they appear to be in relative agreement with older Americans regarding the need to share global leadership with others. Additionally, Millennials are somewhat more supportive of free trade, and have more positive attitudes toward the effects of globalization upon the U.S. economy, than men and women born in earlier eras.


In that sense, we should consider moving beyond euphemistic terms such as global leadership and global engagement, and cast the generational divide as one between hawkish engagement and militarism versus generally peaceful engagement through commerce and cultural exchange (i.e. leading by example).


And, once the Millennial generation is firmly in control, we might see U.S. leadership practiced less through costly and counterproductive wars, and more through mutually beneficial trade and diplomacy.

You can read my complete commentary here.


To watch or listen visit the event page here, and if you would like to learn more, please check out the report.