Did you know that the Jones Act prevents Chinese ships from sailing on the Mississippi River? That, at least, is what Rep. Brian Babin (R-TX) claimed in a recent speech on the House floor. For dramatic effect the congressman used a picture of a ship flying an oversized Chinese flag with St. Louis’s Gateway Arch prominently displayed in the background: 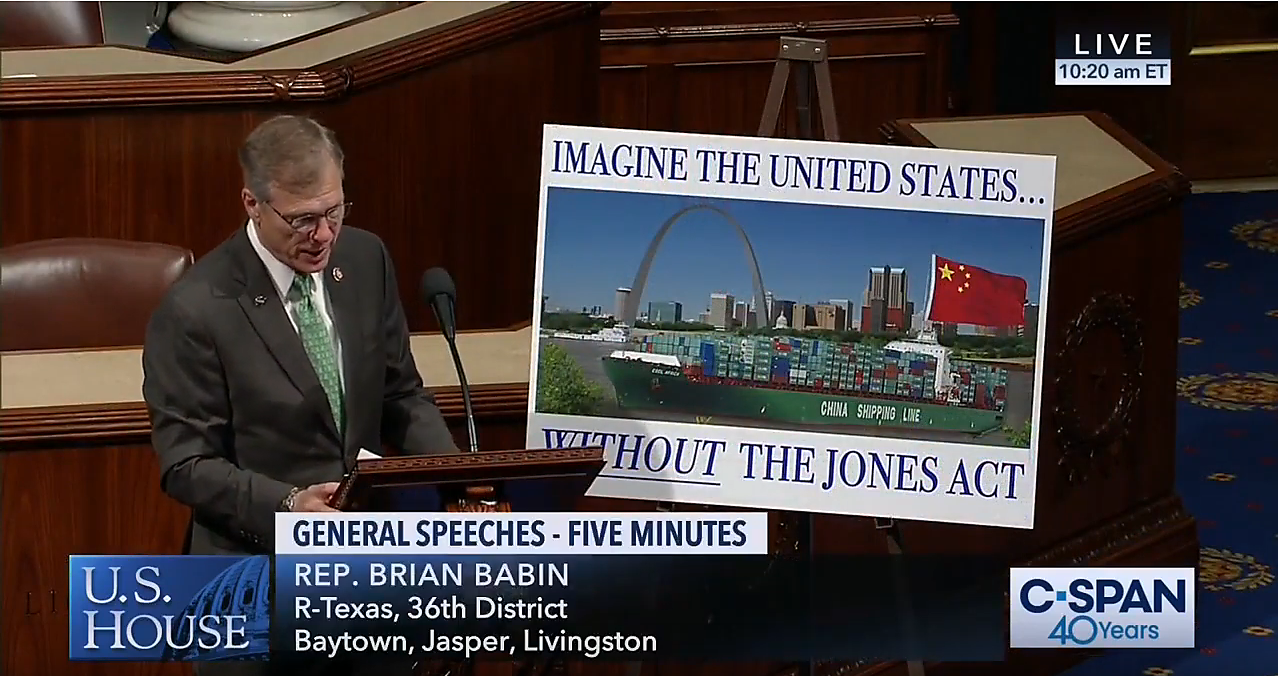 “This is a hypothetical picture, thank goodness,” said the Texas congressman. “A Chinese‐​built vessel, subsidized by their communist regime, operated by the Chinese and delivering Chinese goods all in the very heartland of the United States of America. But this could easily become a reality if the Jones Act is waived.”

Other Jones Act supporters have made similar warnings. Clay Maitland, the chairman of the Merchant Marine Policy Coalition, stated last week that his support of the Jones Act was “all about preventing the Chinese government from getting control of our inland waterways,” while in 2017 the president and CEO of Jones Act carrier Tote Inc. said that the law’s repeal could result in North Korean barges and tugboats operating on the Mississippi River. And just last year the American Maritime Partnership, a Jones Act advocacy group, ran the following internet ad: 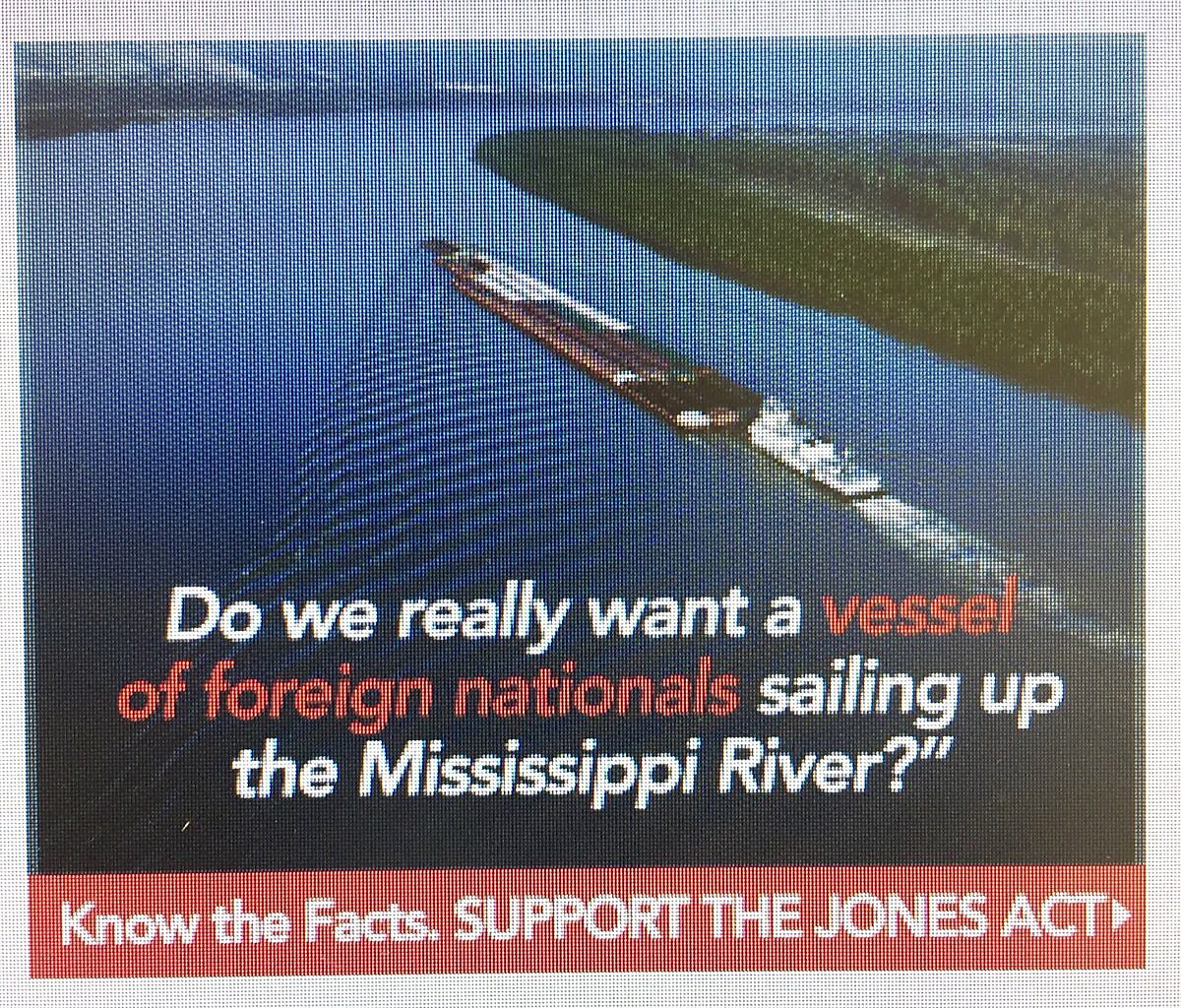 Leaving aside the desirability of foreign ships operating on the Mississippi River, does the Jones Act actually prevent this from happening? Well, no. The Jones Act restricts the domestic waterborne transport of goods to vessels that are U.S.-flagged, U.S.-built and at least 75 percent U.S.-crewed and owned. It says absolutely nothing, however, about the ability of foreign ships to operate on inland waterways.

In fact, there are foreign ships operating on U.S. inland waterways at this very moment. Indeed, a quick peek reveals numerous such vessels on the Mississippi River as far north as Baton Rouge and still more on the Delaware and Columbia Rivers headed to and from Philadelphia and Portland.

That foreign ships are not more prevalent on inland waterways is a matter of simple physics: they’re too large. The ship used in Rep. Babin’s hypothetical picture, the CSCL Africa, has a draft of 11 meters (36 feet). The Mississippi River around St. Louis lacks the depth to support such a vessel. This helps explain why the U.S. Army Corps of Engineers only maintains a 9‐​foot shipping channel north of Baton Rouge but a 45‐​foot shipping channel south of it.

But even the idea of smaller‐​sized foreign vessels on the country’s inland waterways is largely a figment of the Jones Act lobby’s imagination. A 1999 U.S. International Trade Commission report which examined the Jones Act’s economic impact said that it did not bother including inland waterways in its analysis because U.S. operators there “do not appear to be significantly vulnerable to foreign competition that may occur in the absence of Jones Act restrictions.”

This is in large part because foreign vessels would still have to comply with U.S. laws and regulations unrelated to the Jones Act. As Michael Hansen of the Hawaii Shippers Council points out:

…[T]he inland waterways barge industry is the least threatened by Jones Act reform or outright repeal. Even a full national repeal of maritime cabotage would be an insufficient condition for achieving continuous employment of foreign flag vessels operating in purely U.S. domestic trade. This is especially true for foreign shipping to displace purely domestic inland waterways traffic. This is primarily due to the extra‐​cabotage legal and regulatory web enveloping the inland waterways – from immigration, customs, taxation, business registration, labor, health and safety, to wage and hour – which would prevent a foreign flag vessel from being continuously employed in domestic service.

In addition, U.S. builders of smaller vessels such as barges are much more internationally competitive. This means that inland waterways operators are able to purchase vessels at prices similar to those found overseas, thus boosting their ability to compete. As the USITC states, “…operators in the inland trade acquire vessels from the internationally competitive U.S. barge and smaller shipbuilders and so have substantially more competitive capital costs.”