Nick Miroff of the Washington Post rightly credits Chile’s free‐​market system for the country’s stability, low unemployment and corruption, and for producing Latin America’s wealthiest society. But he also states that this economic model “has given Chile some of the highest levels of inequality in the developed world.” Thus, he adopts the narrative of the Chilean left that blames free markets for producing social inequality and argues that the model needs fixing through higher taxation and government intervention in the economy. Four points need clarification:


First, high levels of inequality existed in Chile prior to the implementation of the free market reforms that began in 1975. A recent book by economist Claudio Sapelli of the Catholic University shows that Chile’s Gini index coefficient* was higher in 1970 than what it is today (see graph below). Inequality dropped significantly between 1970 and 1975 as everyone became poorer (the average annual inflation rate in that period was 124.2% and by 1975 over 50% of Chileans lived below the poverty line). Inequality rose again in the second half of the 1970s as the economy recovered and people’s incomes began growing at different paces. As Luis Larraín of Chile’s Libertad y Desarrollo institute points out in a recent book, “It is a well‐​known fact that fast‐​paced processes of growth, in the early stages of development, create a worse distribution of income, as the example of China shows today”. 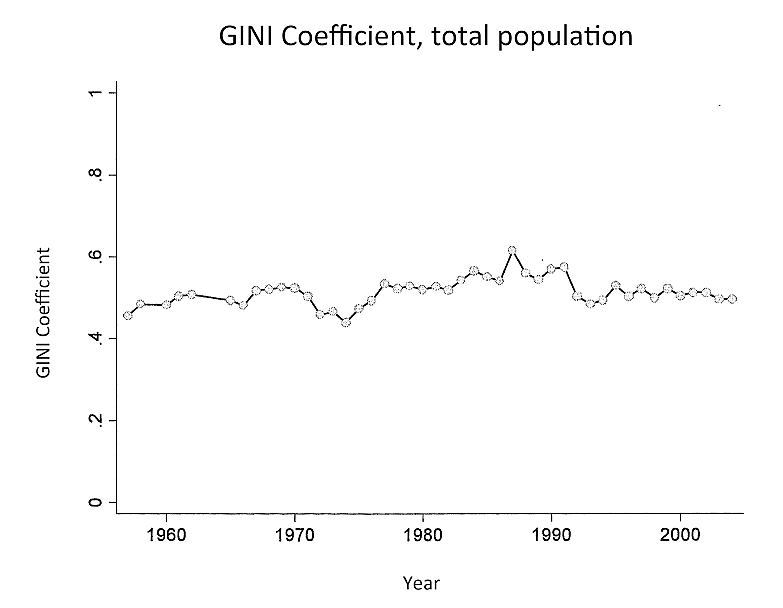 Second, inequality is decreasing in the Andean nation. Income disparity reached a zenith in the late 1980s and has decreased since then. Data from the UN Commission for Latin American and the Caribbean (ECLAC) shows that in 1990 Chile had a Gini index coefficient of 0.55 while in 2011 (latest year available) it was 0.51. In the last two decades of the free‐​market system, inequality has actually come down somewhat. Interestingly, Chile has less inequality than Brazil, but not many people blame the latter’s income disparities on its bloated big government development model.


Third, inequality in Chile will continue to go down since income distribution significantly improves among the young. Sapelli shows that Chile’s Gini index coefficient goes down with age (see graph below) as more Chileans, especially younger generations, have access to health care and education (which, as Miroff notes, are highly privatized). For example, the percentage of people aged 25–64 who have received high school education in Chile is 68%, lower than the OECD average of 71%. But when he looks at the generation aged 25–34, he notes that the rate goes up to 85%, not only higher than the OECD average of 80%, but also superior to the rates of the Netherlands, Norway and Australia. Today, 1.1 million students are enrolled in higher education (45% coverage) compared to just 200,000 in 1990. Over 70% of these students are the first generation in their families to receive higher education. 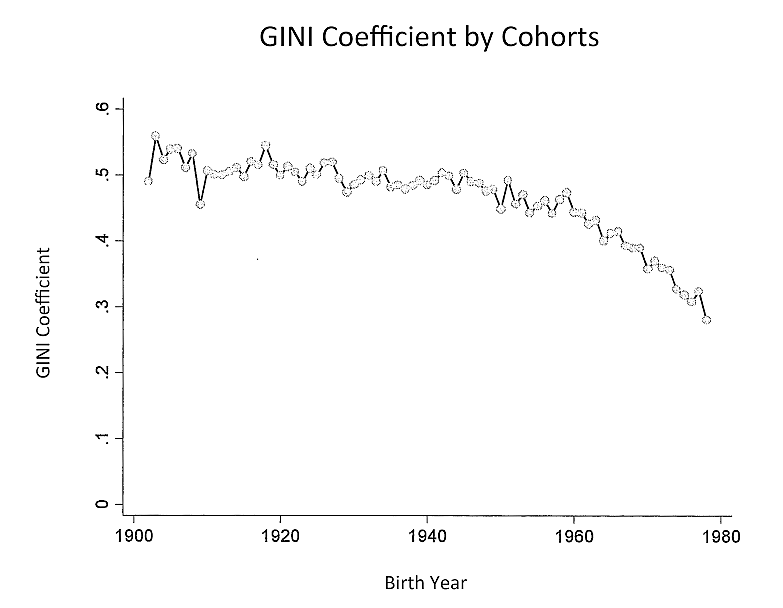 Fourth, some of the policies announced by the newly inaugurated president Michelle Bachelet, supposedly aimed at rescuing Chilean capitalism “from its excesses” (as Miroff puts it), would actually benefit the richest segments of society. A study by the Libertad y Desarrollo institute found that if higher education were “free” in Chile (and by “free” read “paid by taxpayers”), 41% of the resources would go to finance the education of the richest 20%, and only 9% would go to the poorest 20%. As Miami Herald columnist Andrés Oppenheimer has repeatedly documented, “free” higher education in Latin America disproportionately benefits the well‐​off (and adversely affects the quality of the education).


The reasons behind Chile’s left‐​turn have been explained elsewhere. But for the sake of Latin America’s most prominent success story, and the example it provides to the rest of the region, it’s important to tackle the myth propagated by the left that Chile’s free‐​market system is something that needs a radical fix through higher taxes and government intervention.


*In the Gini Index, zero implies perfect equality, while one represents perfect inequality.