Cheap Talk from a Fiscal Commissioner

Rising federal debt is like a tsunami that could swamp the country at any moment…Our economic strength and security is on the line. Now is the time to act. And we need everyone, Democrats and Republicans, working together on a solution.

If now is the time to act, why did Sen. Conrad just pass a budget plan out of his committee that promises massive spending, deficits, and debt?


From a transcript of Conrad’s opening remarks:

Does Sen. Conrad consider farm subsidies to be on the table? In February, the Wall Street Journal exposed Conrad as a hypocritical big spender. For example, Conrad doesn’t miss an opportunity to shower his farm constituents with federal largesse:

He has been a defender of the state’s grain farmers ever since [his election to the Senate in 1986]. He voted last April against a proposal to cap federal payments to the nation’s farmers at $250,000 per farmer per year, a measure that Mr. Conrad criticized as disastrous but that supporters said would have saved $1 billion a year.


He also helped draft a five‐​year, $300 billion farm bill in 2008 that boosted overall farm subsidies. The bill created a $3.8 billion emergency “trust fund” for farmers who lose crops or livestock to natural disasters, which was Mr. Conrad’s idea. Since 2008, North Dakota ranchers have received $23 million under the fund, second only to Texas.

What about federal entitlement programs, which represent the biggest budgetary threat going forward?

In 2003, Mr. Conrad joined most Democratic senators to support Mr. Bush’s plan to provide Medicare prescription‐​drug coverage to seniors, at a cost of around $40 billion a year. The plan required Congress to scrap the spending controls Mr. Conrad once championed. Republicans won the votes of Mr. Conrad and other rural senators by agreeing to expand the program by pumping $25 billion more into rural hospitals and doctors over 10 years.

Then there’s that health care “reform” bill Conrad just voted for, which will cost an estimated $2.6 trillion once fully implemented.


Not to be outdone, the president had his own galling comments:

Flanked by the co‐​chairmen of the new commission, Obama challenged the two parties to join in taking a “hard look” at the growing gap between what the government spends and raises in revenue, and to “think more about the next generation than the next election.”

The “growing gap” the president cites is one of his own doing. The following chart shows the projected gap between spending and revenues according to the Congressional Budget Office’s analysis of the president’s latest budget proposal: 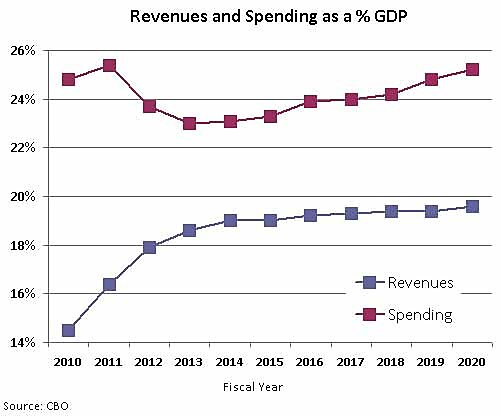 The chart shows that revenues are already set to consume a larger share of the economy. The problem is that spending is on an elevator going up.


The politicians with the most power in Washington are precisely the ones pretending that they are powerless to steer the nation away from a looming fiscal disaster. Their claims are total, utter, complete nonsense. Both Obama and Conrad could have proposed budgets this year that actually cut spending to reduce the deficit. Both chose not to. They are the ones fueling the “tsunami.” They are the ones who don’t have the guts to cut off this generation’s subsidy recipients for the sake of the next generation. It’s that simple.