Challenge for Keynesian Anti‐​Sequester Hysterics, Part I: Why Did Canada’s Economy Boom When the Burden of Spending Was Sharply Reduced?

In this appearance on Canadian TV, I debunk anti‐​sequester hysteria, pointing out that “automatic budget cuts” merely restrain government so that it grows $2.4 trillion over the next 10 years rather than $2.5 trillion.


I also point out that we shouldn’t worry about government employees getting a slight haircut since federal bureaucrats are overcompensated. Moreover, I warn that some agencies may deliberately try to inconvenience people in an attempt to extort more tax revenue.

But I think the most important point in the interview was the discussion of what happened in Canada in the 1990s.


This example is important because the Obama White House is making the Keynesian argument that a smaller burden of government spending somehow will translate into less growth and fewer jobs.


Nobody should believe them, of course, since they used this same discredited theory to justify the so‐​called stimulus and all their predictions were wildly wrong.


But the failed 2009 stimulus showed the bad things that happen when government spending rises, and maybe the big spenders want us to think the relationship doesn’t hold when government gets put on a diet?


Well, here’s some data from the International Monetary Fund showing that the Canadian economy enjoyed very strong growth when policymakers imposed a near‐​freeze on government outlays between 1992 and 1997. 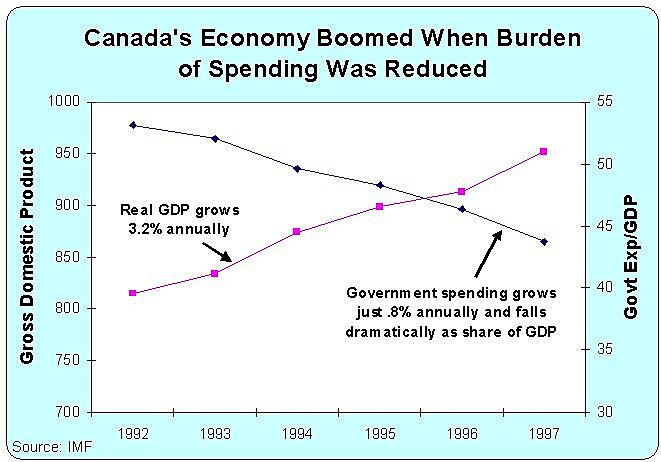 For more information on this remarkable period of fiscal restraint, as well as evidence of what happened in other nations that curtailed government spending, here’s a video with lots of additional information.

By the way, we also have a more recent example of successful budget reductions. Estonia and the other Baltic nations ignored Keynesian snake‐​oil when the financial crisis hit and instead imposed genuine spending cuts.


The result? Growth has recovered and these nations are doing much better than the European countries that decided that big tax hikes and/​or Keynesian spending binges were the right approach.


Paul Krugman, not surprisingly, got this wrong.