I recently wrote in The Hill on Donald Trump’s fiscal plan. The graph below clarifies some of my comments. 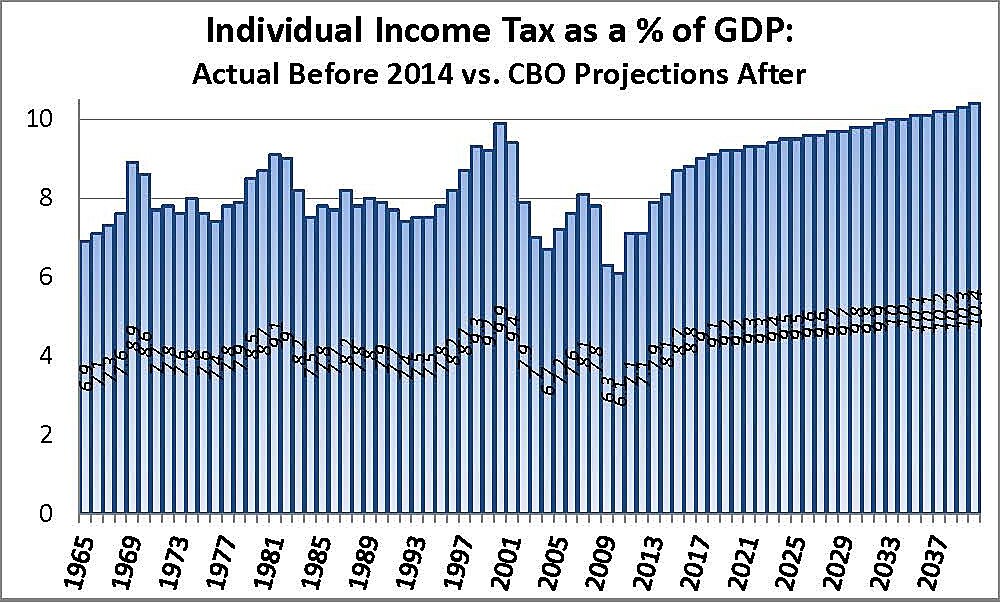 Estimates purporting to show the new, evolving Trump/​Ryan Tax Reform must “lose trillions” over 10–20 years are usually static – meaning they assume lower marginal tax rates on labor and capital have zero effect on economic growth or tax avoidance. Yet that is a relatively small part of the problem.


Even if static estimates made any sense, the alleged revenue losses would still be wildly exaggerated because they compare estimated revenues from reform plans with “baseline” revenues projections from the Congressional Budget Office (CBO).


As the graph shows, CBO projections pretend that revenues from the existing individual income tax will somehow rise as a share of GDP every year –forever– reaching levels never before seen in U.S. history, even in World War II.


Real wages in the CBO forecast supposedly rise so rapidly that more and more middle‐​income taxpayers are pushed into higher and higher tax brackets. Since tax reform eliminates the highest tax brackets, it thwarts these sneaky tax increases and thus appears to “lose money.” But the CBO’s phantom projections are sheer fantasy and no basis for rejecting sensible tax reforms to encourage more business investment and greater labor force participation.