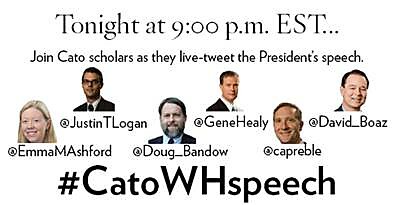 At 9:00PM tonight, President Obama will announce expanded U.S. military action against the Islamic State in Iraq and Syria (ISIS). He will likely explain an apparent change in direction that will include airstrikes in Iraq and Syria and possibly increased training and weapons procurement for the Iraqi military and “moderate” segments of the Syrian rebellion. Americans are understandably worried about getting sucked back into an open‐​ended conflict.


Don’t miss Cato experts live tweeting Obama’s speech tonight, using the hashtag #CatoWHSpeech. You can check out the reactions and opinions of our scholars in real time. Just follow along and join in!