Congress is considering passing additional financial aid for state and local governments. I argued against further aid in this Fox News op‐​ed. One reason is that many states have built substantial rainy day funds, which will help them balance their budgets even as tax revenues decline. Federal bailouts would undermine incentives to build such useful funds going forward.

California has built a substantial rainy day or reserve fund over the past five years, as shown in the chart below from this state report. State residents passed a referendum in 2014 to create the fund structure, and so kudos to Californians for approving Proposition 2 by 69–31. The state is in a better place today both because the reserve fund can be tapped during the crisis and because contributions to the fund during the boom helped to reduce program growth. 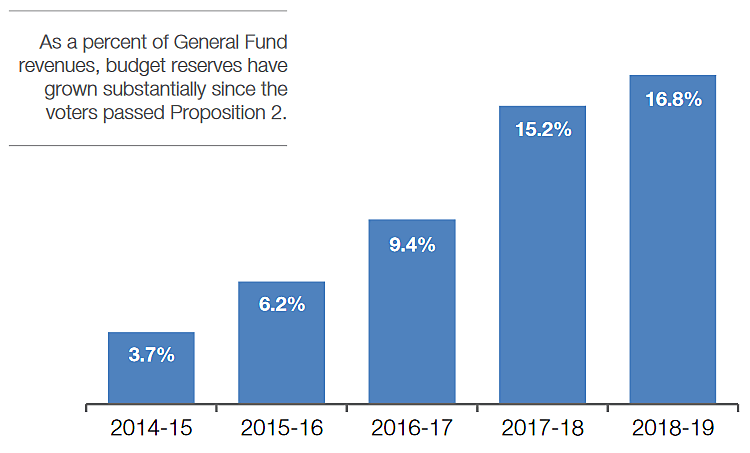 California political leaders who supported Proposition 2 should also be commended, including former Governor Jerry Brown. Brown scored poorly on Cato’s Report Cards, but I did note his support of expanding the rainy day fund.

California needs a larger rainy day fund than most states because its revenue system is so volatile. The system is heavily dependent on highly “progressive” income and capital gains taxes, which are tied to growth in Silicon Valley. The top 1 percent of earners pay almost half of California’s income and capital gains taxes, which is remarkably lopsided.

The California Legislative Analyst’s Office (LAO) includes this graphic in its CalFacts publication:

To better handle downturns and promote economic growth going forward, California should restructure its tax system to rely more on sales taxes and less on income and capital gains taxes.

California also needs budget reform because spending rises too quickly during booms. General fund spending rose 6.2 percent in 2018 and 12.1 percent in 2019. The governor has just released projections showing slower 3.3 percent spending growth in 2020 and spending cuts in 2021. The rainy day fund helps, but California government will need to downsize in coming months as revenues fall. Hopefully, the sobering new projections will encourage policymakers to reopen the state economy as quickly as possible.

Over the longer term, California should shrink overall taxing and spending. But its experience shows that even states on the political left can build substantial reserve funds. I argue here and here that when the current crisis passes and the economy starts growing, states should begin building reserves for the next rainy day.

By the way, California’s LAO produces excellent data and studies, perhaps superior to that produced by federal agencies. The CalFacts booklet, for example, has many interesting charts on taxes, budgets, education, and other topics.