At a press conference earlier this month, California Governor Gavin Newsom announced a new plan to offer 6‐​months of paid family leave in the Golden State. Despite it being the most generous in the nation, CNN parenting contributor Elissa Strauss felt it’s not enough, saying it’s “so much better than nothing, but leaves room for improvement.” Yet, the Cato 2018 Paid Leave Survey finds that at the national level, Americans are not supportive of establishing a 6‐​month paid leave program.


The survey found that less than half (48%) support “establishing a new government program to provide 6‐​months of paid, job‐​protected, leave to workers after the birth or adoption of a child or to deal with their own or a family members serious illness.” Fifty‐​percent (50%) oppose establishing a 6‐​month paid leave program. 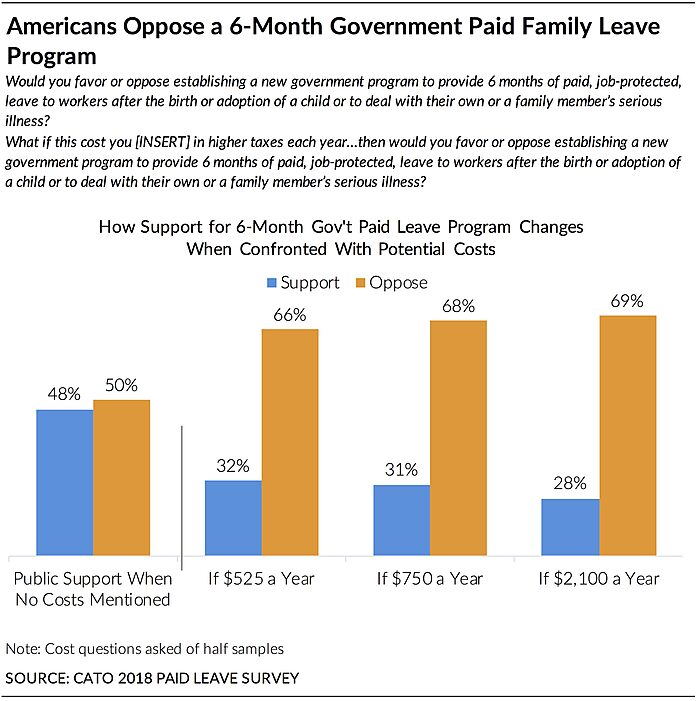 Notably, support is low despite the question not mentioning anything about tax increases or other trade‐​offs that are required when establishing a new government program. As the New York Times rightfully points out, it remains unclear how California will pay for 6‐​months of paid family leave benefits.


Fortunately, the Cato 2018 Paid Leave Survey asked Americans how much they’d be willing to pay in higher taxes each year to establish a 6‐​month paid leave program. The survey finds that 66% of Americans would oppose establishing a 6‐​month paid leave program if it cost them $525 per year in higher taxes, 68% would oppose if it cost $750 a year, and 69% would oppose if it cost $2,100 in higher taxes.[1] These costs are based on using certain program assumptions from the Family Medical Insurance Leave (FAMILY) Act sponsored by Sen. Kirsten Gillibrand (D-NY) and Rep. Rosa DeLauro (D-CT). (See here for more information).


Some could reasonably point out that California is more liberal than the rest of the country, with California voting Democratic in 7 of the past 10 presidential elections. To consider how Democratic‐​leaning Californians might feel about increasing their taxes to pay for a 6‐​month paid leave program, we can examine what Democrats nationally think about it: 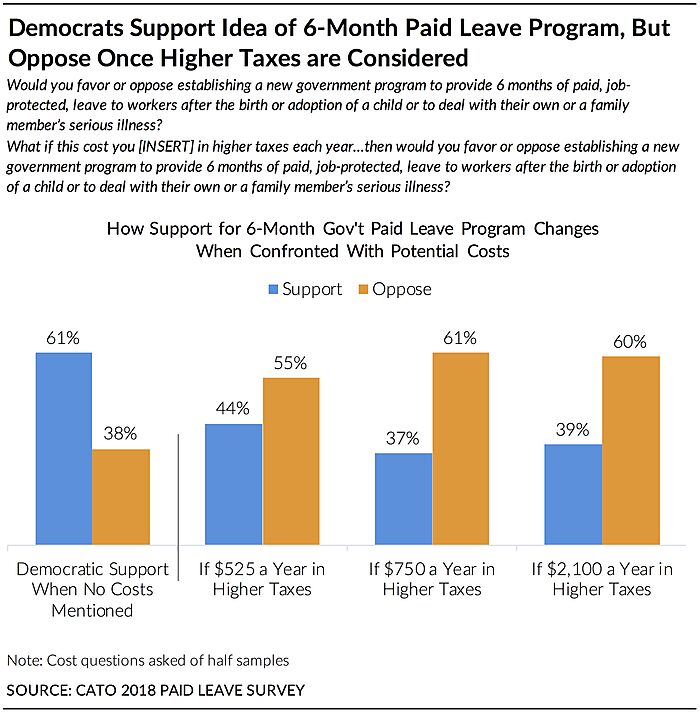 
These results suggest that if California voters more closely resemble national Democratic voters rather than the nation as a whole, they would like the program in theory but not in practice. While they may desire to offer a 6‐​month paid family leave benefit to people, they would not tolerate the higher taxes likely required to properly fund the program.


California already has the highest income tax rates in the country, reaching up to 13.30%, with the average family paying 9.30%, and a statewide sales tax rate of 7.25% percent in addition to local sales tax rates. Especially given these conditions, it remains uncertain voters would be willing to tolerate another tax increase. One option to keep costs low could be to means‐​test the program so that only the needy would receive benefits. Otherwise, the program may be too expensive for voters to accept. Another option is to promote tax‐​advantaged savings accounts. Eighty‐​two percent (82%) of Democrats, as well as 78% of all Americans, would support creating tax‐​advantaged family leave savings accounts that could be used if people needed to take family or medical leave.


Altogether, these results indicate that while Californians may be excited about the benefits that this new program would offer, they are likely to resist the higher taxes likely required to make the program possible.


Read about the full survey results and analysis here.

The Cato Institute 2018 Paid Leave survey was designed and conducted by the Cato Institute in collaboration with YouGov. YouGov collected responses online during October 1–4, 2018 from a national sample of 1,700 Americans 18 years of age and older. Restrictions are put in place to ensure that only the people selected and contacted by YouGov are allowed to participate. The margin of error for the survey is +/- 2.4 percentage points at the 95% level of confidence.

[1]Public support doesn’t change much after taxes reach $525 a year perhaps because Americans aren’t supportive of the program to begin with. After taxes are mentioned there may be a threshold after which cost‐​conscious people will be opposed. Those who remain in support even if the costs rose to $2,100 a year may be very ideologically committed to establishing a program, they think someone else will foot the bill, or they may not believe taxes would actually be raised that much.