Today’s Washington Post story by Darryl Fears on California drought frequency in a warming world compelled me to take a look at the Golden State’s temperature history. In my 2011 book Climate Coup,  I showed that the alarm over California warming was rather odd, as most of the changes had taken place thirty years previously.

That was then, and this is now. But what about history?

Here are California temperatures, for the last 38 years, beginning in 1976.  That’s the year of “The Great Pacific Climate Shift,” a sudden and lasting change in both the surface and oceanic circulation patterns.  2014 is by far the warmest year in the California record, as is obvious:

Several things stand out. There’s obviously no warming through 2011 (when Climate Coup was published).  But the pop between 2013 and 2014 is pretty impressive, no?

Fast-backward to 1934. J.B. Kincer had just published the first systematic temperature analysis from locations around the planet, in the 1933 Monthly Weather Review paper titled “Is our Climate Changing?” The paper clearly demonstrated global warming, and people were starting to talk about the influence of increasing atmospheric carbon dioxide on surface temperature. The only thing that was different back then is that we didn’t have computers to simulate what should have been happening. But if we did, I suspect that Darryl Fears’ progenitors would have written a pretty similar story. 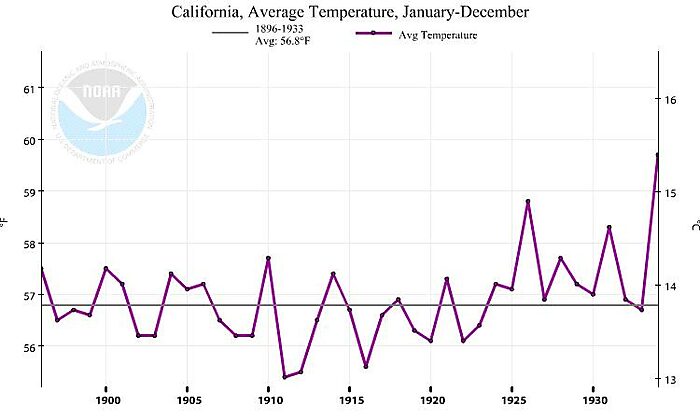 What’s different here? Nothing. Also worth noting is the difference in mean temperature between the two periods, providing very strong evidence for the step-change in California temperature that occurred with the Great Pacific Climate Shift in 1976.

Armed with a computer model in 1935, one could probably have written the exact same story 80 years ago, prompted by the very similar outlier temperatures of 1934 and 2014.