California’s Central Valley is one of the true wonders of the agricultural world.  Prior to settlement, it was grassland in its northerly regions (around Sacramento) and desert at the southern end (Bakersfield).  As a result of irrigation from water stored both in the ground and in the many rivers that drain into it, this 1 percent of the nation’s cropland produces 8 percent of our national agricultural output (by value). That doesn’t count the equally productive but much smaller Salinas Valley, which is likely where your artichokes came from.

John Christy, a fellow-lukewarmer (and a Valley native) who is also state climatologist for Alabama, has published extensively that irrigation has changed the Valley’s climate, resulting in a warming produced not by carbon dioxide but by water vapor, which tends to skew heating into the night.

Everything else being equal, increasing the surface moisture in a hot-as-heck environment (like the Central Valley) will increase atmospheric instability, and, given proper conditions, should result in increased convective (thunderstorm) activity. Add in that prevailing mid-atmospheric winds in this region blow from west to east, and you wind up running the increased water vapor uphill into the Sierras, the Wasatch, and the Rockies. That’s pretty much guaranteed to increase thunderstorm activity.

A newly published study fleshes this out with a computer model, and finds that irrigation in the Central Valley of California not only adds water to the local environment but also alters the regional climate across the Colorado River Basin, increasing summer precipitation by 15 percent and Colorado River flow by nearly 30 percent. Those are big numbers and important ones, given the water needs of some 35 million people from Las Vegas to Phoenix to L.A.

Min-Hiu Lo and James Famiglietti, researchers at the University of California-Irvine, added the 350mm of water annually delivered by irrigation to the 52,000 km2 Central Valley to a climate model developed by the National Center for Atmospheric Research (NCAR). They then compared the climate model output when run with and without the Central Valley irrigation.

Figure 1 shows the difference between the irrigated run and the control run of the model, in terms of summer monthly total precipitation. The blue areas show precipitation increases that result from the Central Valley irrigation. Lo and Famiglietti report that the boost in summer precipitation is between 10% to 20% depending on the location. And better still, the increased precipitation leads to an increase in the summer flow rate of the Colorado River by 28%. 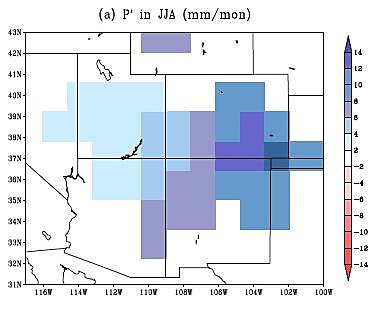 Figure 1. The difference in monthly total precipitation (mm/month) as calculated by the NCAR climate model between the irrigated and the non-irrigated Central Valley runs (Source: Lo and Famiglietti, 2013).

The mechanism by which this happens is the one hypothesized above, with an additional adjuvitant: the increasing upward motion draws in more moist air that originates from the Gulf of Mexico and causes the summer monsoon. The amount of irrigation water added to the Central Valley turns out to be about equal to the amount of extra water delivered from the enhanced monsoon over the Southwestern U.S. That is double the bang for the buck. What’s not to like?

Probabilities argue that the pressers at Cal-Irvine know which way the political winds blow political $$$, so leave it to them to find the horror:

While the additional water supply can be a good thing, the transport pattern also accelerates the severity of monsoons and other potentially destructive seasonal weather events.

Note to the UCI press:  The water you drank this morning came courtesy of rain and snow in the Rocky Mountains.  More people want more water. It is a fact that summer rainfall will increase (according to these models) because of the water we use to grow food evaporates, moves east, condenses as thunderstorms, and then runs back downhill to your faucet or appears as your salad. Yes, it is a fact that water flowing downhill creates erosion—that’s why there’s the Grand Canyon of the Colorado—but the benefits of enhanced precipitation out West are patently obvious.

Prima facieevidence is the extensive hand-wringing by the U.S. Global Change Research Program (see here for their work and here for our response) over their projection of decreased precipitation over precisely the same region. Their models didn’t include the influence of California irrigation.

And you thought humans only negatively affected the climate!

Now before we go and get overly excited about this good climate news, we’ll point out that the result was found in computer models, rather than demonstrated in the real world. But, if computer climate models are good enough to scare us about climate change, then they ought to be good enough to give us some positive news as well.

Other recently published results suggest something similar. Research led by Yanhong Gao of the University of Washington found that when the resolution of climate models is improved so as to better capture the complex terrain in the southwestern United States, the models produce a lot less future drying and a lot less snow loss from higher elevations. Gao et al. (2011) wrote that apparently “runoff in the Colorado River Basin is less susceptible to a warming climate” when the higher resolution models are used.

Coupling better models with a more complete picture of anthropogenic influences yields a much less dire picture of the future hydroclimate of the Southwestern United States, including flows in the Colorado River.

Alas, they most certainly are not.