Bush Was Not a Conservative

There's an interesting debate in the blogosphere about whether President George W. Bush was a conservative. Here's a good summary of the discussion, along with lots of links. (I especially like this analysis since it cites my work.)

I've already explained that Bush was a statist rather than a conservative, and you can find additional commentary from me here, here, here, and here.

Simply stated, any president who doubles the burden of federal spending in just eight years is disqualified from being a conservative — unless the term is stripped of any meaning and conservatives no longer care about limited government and constitutional constraints on Washington.

But if you don't want to read the blog posts I linked above, this chart should make clear that Bush was a big spender, not only when compared to Reagan, but also compared to Clinton. Moreover, we're only looking at overall domestic spending, so this doesn't include Iraq, Afghanistan, and other defense expenditures. And these are inflation-adjusted dollars, so we're comparing apples to apples. 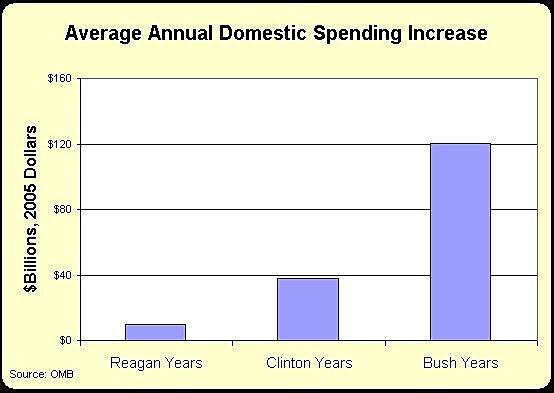 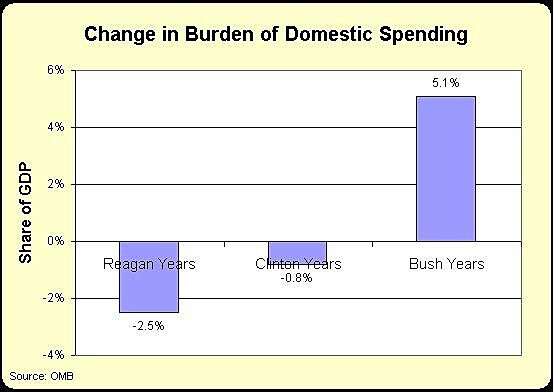 These numbers should not be a surprise. During Bush's tenure, we got the no-bureaucrat-left-behind education bill, two corrupt farm bills, a new prescription drug entitlement, two pork-filled transportation bills, an auto company bailout, and a TARP bailout for banks.

This was a time of feasting for special interest groups and lobbyists, to put it mildly.

If that's conservative, then Ronald Reagan was a liberal.