Building a Free Trade Area of Most of the Americas

Today the Free Trade Agreement between the United States and Panama went into effect. The United States now has FTAs with Canada and eleven Latin American countries stretching from Mexico to Chile. My colleague Bill Watson has a less enthusiastic view of the FTA with Panama here.


Last week during the third presidential debate, Mitt Romney talked about how the United States has not taken full advantage of trade opportunities with Latin America. Some experts, such as Ted Piccone at the Brookings Institution, were quick to point out that Romney’s call for expanded trade with Latin America isn’t very realistic since Washington already has in place FTAs with all the Latin American countries that want trade agreements with the United States while those who don’t, such as Brazil and Argentina, aren’t interested in one. However, that doesn’t mean that there’s no room for a substantial hemispheric trade agenda.


As we can see in the table below, the countries Washington has free trade agreements with in the Americas also have similar FTAs among themselves. There are some missing links here and there, but overall these countries have created a fragmented version of a free trade area of the Americas. One obvious problem of this is what Jagdish Bhagwati has called the “spaghetti bowl effect” of so many trade agreements with different rules of origin, tariff schedules and non tariff regulations. 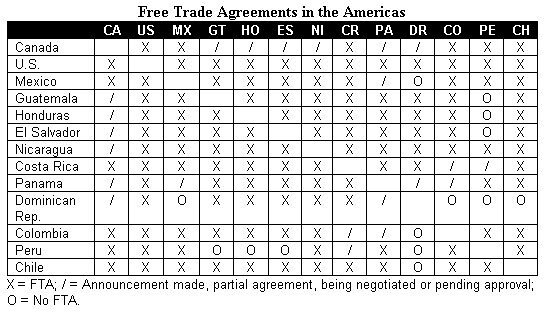 There are some efforts underway to tackle this problem. For example, Mexico has individual FTAs with five Central American countries, but it’s now negotiating with them to merge all these trade agreements into one. Mexico has also announced the creation of the Pacific Alliance, a trade bloc that will also include Colombia, Peru and Chile.


The United States should lead an effort to merge all these regional FTAs into one single Free Trade Area of the Americas for these nations willing to be part of it. The negotiations could also help to complete those missing links in the hemispheric trade jigsaw puzzle. And once achieved, this FTAA would leave the door open for other Latin American countries that might want to join in the future (the most likely candidates would be Uruguay and Paraguay given their growing dissatisfaction with Mercosur).


Even though the United States wouldn’t gain much in terms of market access from such an FTAA, harmonizing trade rules along the continent would certainly help boost trade in the Americas. Moreover, the political cost would be minimal since Washington already has FTAs in place with all these countries.


Bill Clinton proposed the idea of a Free Trade Area of the Americas in 1994, though he quickly abandoned it despite wide interest in Latin America. The negotiations were finally launched in 2001 but fell apart in 2005 after it became obvious that countries such as Brazil, Argentina and Venezuela weren’t interested anymore. But this must not mean that the goal isn’t worth pursuing in a different way. There is a good case to be made for building an FTAA of the willing.