It's fire season again, which means we are once again treated to stories about how the Forest Service is running out of money and about how it all must be due to climate change. Both of these claims overlook fundamental points about fire policy and firefighting. 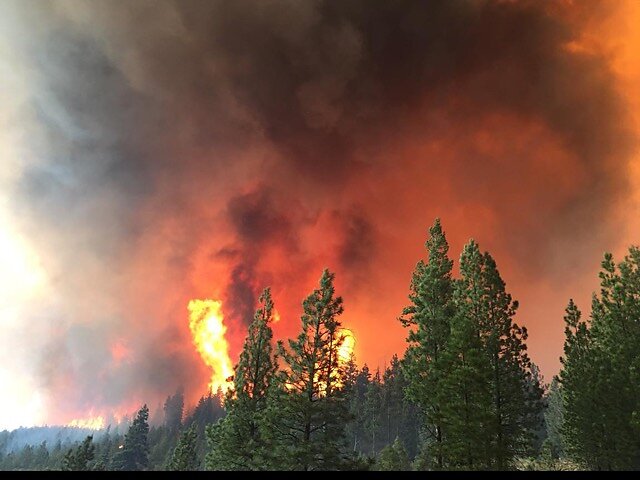 As of August 16, the BLM had spent $2.2 million controlling the 88,000-acre Cornet Fire on the Vale District in Oregon. The Forest Service has spent two-and-one-half times that much on a fire that was just 515 acres in size. BLM photo.

We don't yet have 2015 data, but for the past several years the Forest Service has spent about $4 on fire suppression for every dollar spent by the Department of the Interior even though it had fewer acres burn. As a result, over the past five years, it has spent an average of $914 per acre vs. $171 per acre spent by the Interior department.

To deal with rising fire suppression costs, Congress is continually thinking up schemes to give the Forest Service more money. That's like trying to control a fire by pouring gasoline on it. The problem is not a shortage of funds, but too much money giving Forest Service firefighters no incentive to control costs. Costs will continue to rise until Congress figures this out and fixes the problem, possibly by turning firefighting over to the states and paying the states the same fixed annual amounts per acre that private forest land owners pay.

A comparison of firefighting costs with acres burned shows that there is little correlation: no matter how many acres burn, firefighting agencies (led by the Forest Service) spend about $1.5 billion to $1.9 billion per year. If this is increasing, it is not due to the severity of the fires but to loose spending by Congress.

The claims that growing wildfires are due to human-caused climate change are equally questionable. They are based on a recent study that compares fire trends since 1979. According to the Union of Concerned Scientists, the number of large fires per year has grown and the fire season has lengthened.

Despite all the concern over the drought, these claims aren't borne out by the 2015 fire season. It is true that, as of August 14, more acres have burned this year than any year in the previous decade. What those numbers don't show, however, is that 5.1 million of the 6.8 million acres burned as of yesterday were in Alaska.

One reason Alaska fires are so big is because no one spends much effort trying to control them. For example, the BLM spent a mere $2.8 million on fires that covered more than 400,000 acres near Ruby, Alaska.

Any fire study that only looks back as far as 1979 ignores huge fires that resulted from major droughts in earlier decades. The 1970s were one of the wettest decades on record, with an average of just 3 million acres a year burned. By comparison, there were 9 million acres of annual fires in the 1950s; 23 million in the 1940s; and 39 million in the 1930s. While there are some problems with data from those early decades, they are valid enough to show that recent changes in droughts and fires are due to cyclical variations in climate, not to human-caused warming.

Any look at fire data since 2000 must also take into account a major change in firefighting tactics. Before 2000, the Forest Service and other agencies put firefighters to work at fire edges to contain fires. Too many firefighters died, so now they start huge backfires thousands of feet, and perhaps miles, away from the wildfire fronts. As a result, fires are larger today, but only because a third or more of the acres burned were actually lit by firefighters.

Although it is eight years old, my policy analysis on wildfire is still valid today. The problem is not climate change and the solution is not to give firefighters more money. Instead, the problem is too much money and the solution is to treat the land near homes and other structures to make them defensible and then focus fire suppression efforts on nearby public lands mainly on making sure those fires don't cross over onto private land.