On the Bright Side: Three Full Decades of CO2‐​Induced Vegetative Greening in China

Here we introduce a new feature from the Center for the Study of Science, “On the Bright Side.” OBS will highlight the beneficial impacts of human activities on the state of our world, including improvements to human health and welfare, as well as the natural environment. Our emphasis will typically focus on the oft-neglected positive externalities of carbon dioxide emissions and associated climate change. Far too often, the media, environmental organizations, governmental panels and policymakers concentrate their efforts on the putative negative impacts of potential CO2-induced global warming. We hope to counter that pessimism with a heavy dose of positive reporting on the considerable good humans are doing for themselves and for the planet.

According to Piao et al. (2015), the reliable detection and attribution of changes in vegetation growth are essential prerequisites for “the development of successful strategies for the sustainable management of ecosystems.” And indeed they are, especially in today’s world in which so many scientists and policy makers are concerned with what to do (or not do) about the potential impacts of CO2-induced climate change. However, detecting vegetative change, let alone determining its cause, can be an extraordinarily difficult task to accomplish. Nevertheless, that is exactly what Piao et al. set out to do in their recent study.

More specifically, the team of sixteen Chinese, Australian and American researchers set out to investigate trends in vegetational change across China over the past three decades (1982-2009), quantifying the contributions from different factors including (1) climate change, (2) rising atmospheric CO2 concentrations, (3) nitrogen deposition and (4) afforestation. To do so, they used three different satellite-derived Leaf Area Index (LAI) datasets (GLOBMAP, GLASS, and GIMMIS) to detect spatial and temporal changes in vegetation during the growing season (GS, defined as April to October), and five process-based ecosystem models (CABLE, CLM4, ORCHIDEE, LPJ and VEGAS) to determine the attribution.

With respect to detection, this work revealed that most regions of China experienced a greening trend indicative of enhanced growth across the time period studied (see Figure 1). Overall, 56 percent of the area studied experienced a significant increase in greening (95% level) when using the GLOBMAP dataset, compared with 54 and 31 percent using the GLASS and GIMMIS datasets. Those regions with the largest greening trends include southwest China and part of the North China Plain. 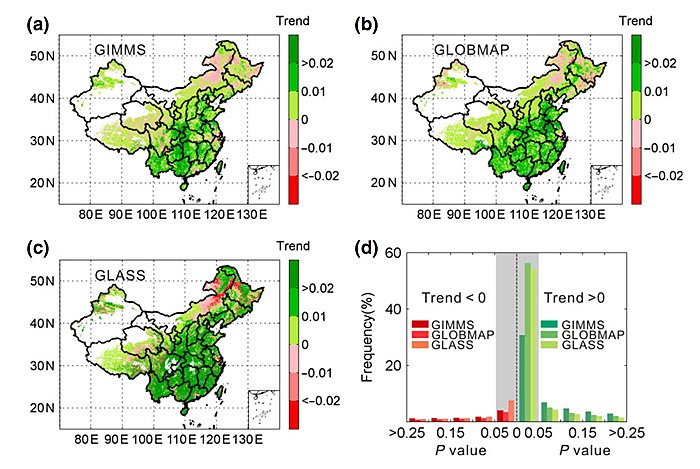 With respect to attribution, Piao et al. report that “the combined effect of CO2 fertilization and climate change with the effect of nitrogen deposition, leads to the conclusion that these three factors are responsible for almost all of the average increasing trend of LAIGS observed from the satellites” (see Figure 2). They also report that “at the country scale, the average trend of LAIGS attributed to rising CO2 concentration is estimated to be ... about 85% of the average LAIGS trend estimated by satellite datasets,” while noting secondarily that the enhanced nitrogen deposition driven by fossil fuel combustion and agricultural fertilization is likely the source of the remaining portion of China’s enhanced vegetation growth, citing the findings of Reay et al. (2008), Thomas et al. (2009), Fleischer et al. (2013) and Yu et al. (2014).

Figure 2. Trend in China’s LAIGS over the period 1982–2009 at the country scale for the three satellite remote sensing datasets and five process models described in the text above. Significance levels of 95 and 99 percent are denoted with one and two asterisks, respectively. See the authors' original text (Piao et al., 2015) for additional explanation of this figure.

In considering the researchers' several findings, it is clear that the fossil fuel combustion that has resulted in the rise in atmospheric CO2 and enhanced nitrogen deposition over the past three decades has provided a great benefit to Chinese vegetation. As illustrated in Figure 2, led primarily by the increase in CO2, that benefit has been more than sufficient to compensate for the negative effects of climate change that also occurred over that time period. Thus, it would seem far more prudent to celebrate CO2 instead of demonizing it, like so many people incorrectly do these days; for atmospheric CO2 is truly the elixir of life!