The Washington Post feature “On Faith” today discusses Ireland’s new, profoundly misguided blasphemy law. Blasphemers there can now be fined up to $35,000. That’s a lot of money for a few little words.


Atheist Ireland is testing — and protesting — the law by publishing blasphemous quotations like the following:

“Thou hast said: nevertheless I say unto you, Hereafter shall ye see the Son of man sitting on the right hand of power, and coming in the clouds of heaven.”


“Ye are of your father the devil, and the lusts of your father ye will do. He was a murderer from the beginning, and abode not in the truth, because there is no truth in him.”


“May Allah curse the Jews and Christians for they built the places of worship at the graves of their prophets.”


“Show me just what Muhammad brought that was new and there you will find things only evil and inhuman, such as his command to spread by the sword the faith he preached.”

They are, respectively, from Jesus, Jesus, Muhammad, and Benedict XVI.


Maybe it’s an American thing, but the Post apparently couldn’t find any panelists to defend the law. These folks are all professional wordsmiths, of course, and these tend to be most supportive of the freedoms that they depend on the most. As I noted in my recent Policy Analysis, those who are most easily offended, and who value free speech the least, tend to gravitate not to newspapers, but to governments (and university administrations). That’s where the power is.


Susan Jacoby, for whom I have the utmost respect, even calls the law Pythonesque, likening it to the Ministry of Silly Walks. Of course, there’s this as well:

Blasphemy laws are oddities, because they concede an awful lot of emotional power to the blasphemer. They tell the world: My feelings are so very fragile. Or perhaps they say: My god is so very weak — so weak that he needs state protection against other gods, or even against mere potty‐​mouthed humans. Either way, it’s an embarrassing admission, but hardly the business of government. If your god can’t take the heat, he’s hardly a god at all. 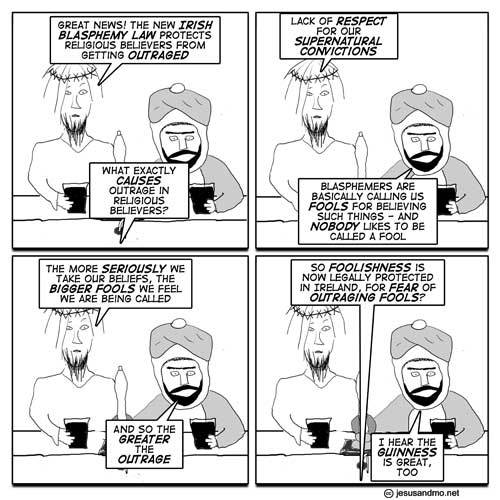