In the now-heated effort of D.C. policymakers and pundits to afix blame for the current financial mess, some fingers are being pointed at the Federal Reserve. The criticism: the Fed kept interest rates too low in the early 2000s, resulting in a lot of easy money. That money, in turn, created the housing bubble and subsequent collapse, ushering in the financial crisis.

Is this criticism sound?

Figure 1 shows the three-month Treasury Bill rate and the Federal funds rate over the past several years. It indicates that, yes, money was easy in the early 2000s, but not because of the Fed. The Fed was forced to reduce and maintain a low Fed funds rate in response to the market's high price (and corresponding low interest rate) for short-maturity securities such as 3-month T-Bills. 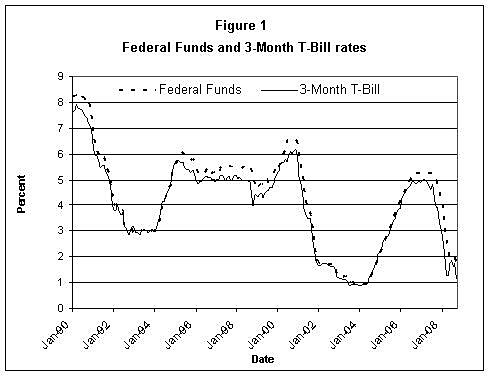 So why were market rates so low?

Chairman Bernanke has suggested that foreign capital inflows were the true cause of easy money earlier this decade. Figure 2 shows that net international capital inflows surged beginning in 1998 and remained high thereafter. Superficially, the interest rate vs. international capital inflows correlation is not strong enough to clinch his argument. Critics could ask why interest rates did not fall until January 2001. Perhaps the answer would be that a strong U.S. economy and stock market during the late 1990s held up interest rates for a time. But then why did asset markets tank in January 2000, followed by the economy in January 2001? Some folks might respond that the Fed funds rate was unsustainably high during 2000. But we don't really know the answer as yet. 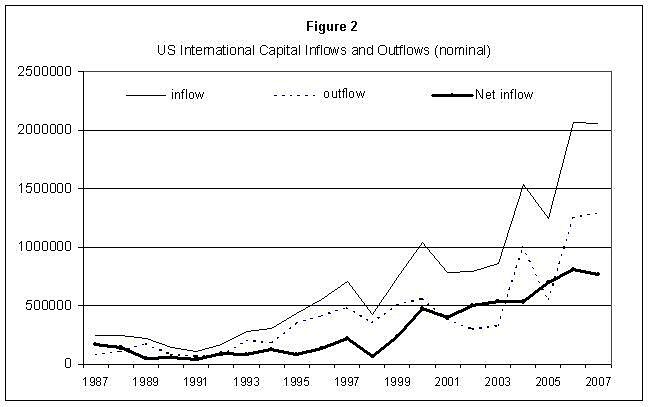 Another question is why did market short-term interest rates increase after mid-2004 despite strong capital inflows? I don't think anyone has a good answer for that, either.

But let's return to the fact that the Fed had to cut its funds rate earlier this decade in order to keep pace with declining short-term market interest rates. So long as the Fed's objective is to maintain the amount of bank reserves in circulation at a level that is just enough to achieve its non-inflationary growth objective and to do so through an interest rate targeting operation, it has no choice but to set the Fed funds rate as close as possible to short-term market interest rates. Otherwise, the Fed would risk injecting too much (or too little) liquidity into the economy — precisely what it's now being incorrectly blamed for.

This brings us to the question of what, in light of the current crisis, the Fed should do to achieve its sometimes-conflicting objectives of maximizing non-inflationary growth and also ensuring systemic stability — that is, to avoid widespread failures among large financial institutions of the kind we have witnessed this year. The Fed appears to have no systematic approach or tools to achieve its second objective.

One possible method is stricter imposition of regulatory constraints, to prevent home price inflation from incentivizing excess and risky mortgage lending. But that approach was rejected by Fed and Treasury officials (see yesterday's NYT). And they did that, possibly, for good short-term reasons: a buoyant asset sector returns political dividends, but the systemic problems happen on someone else's watch. Or, more charitably, Fed officials may have genuinely believed that financial innovations (such as dynamic hedging) meant that the risks were spread so broadly that they didn't matter anymore.

Another possibility is for the Fed to incorporate asset prices in its measure(s) of price stability — that is, include home and stock prices instead of just consumer goods when trying to determine if inflation is occurring. Doing so could lead the Fed to implement pre-emptive monetary strikes against perceived systemic risks in order to avoid an asset inflation party. That would be consistent with the definition of the Fed's role (take away the punch-bowl just before the party really gets going), but it may not be any less "socialist." Fed officials have now acknowledged that they are studying this issue and the jury is still out on it.

However, now we are paying the price for the lack of a proper market-oriented governance framework for dealing with systemic instability — by gravitating toward direct socialist control of the financial sector in an unproductively panicked manner.