In a speech on Friday, outgoing Fed Chairman Ben Bernanke defended his record of extraordinary policy interventions. One of his framing techniques is to claim that extreme monetary efforts were needed in the last few years—from his Keynesian perspective—to offset “contractionary” fiscal policy.

Here I show that federal deficits in 2011, 2012, and 2013 were an enormous $1.3 trillion, $1.1 trillion, and $680 billion, respectively. In Keynesian terms, those deficits are the farthest thing from “quite restrictive” fiscal policy. To Keynesians, those deficits should have made the economy boom, yet the United States has had the slowest recovery since World War II.

In addition, throughout much of the recovery, state and local government budgets have been highly contractionary, reflecting their adjustment to sharply declining tax revenues. To illustrate the extent of fiscal tightness, at the current point in the recovery from the 2001 recession, employment at all levels of government had increased by nearly 600,000 workers; in contrast, in the current recovery, government employment has declined by more than 700,000 jobs, a net difference of more than 1.3 million jobs. There have been corresponding cuts in government investment, in infrastructure for example, as well as increases in taxes and reductions in transfers.

Bernanke is trying to pull the wool over your eyes here. He calls state/​local budgets “highly contractionary,” but notice how he does not give the actual budget numbers, and instead jumps to employment and infrastructure.


The following chart shows total state/​local government spending from BEA Table 3.3. Spending in recent years has been “flat,” not “highly contractionary.” (For 2013, I used the average of the first three quarters). By the way, this BEA table also shows that state/​local deficits have been up in recent years compared to before the recession, which is also not “contractionary.” 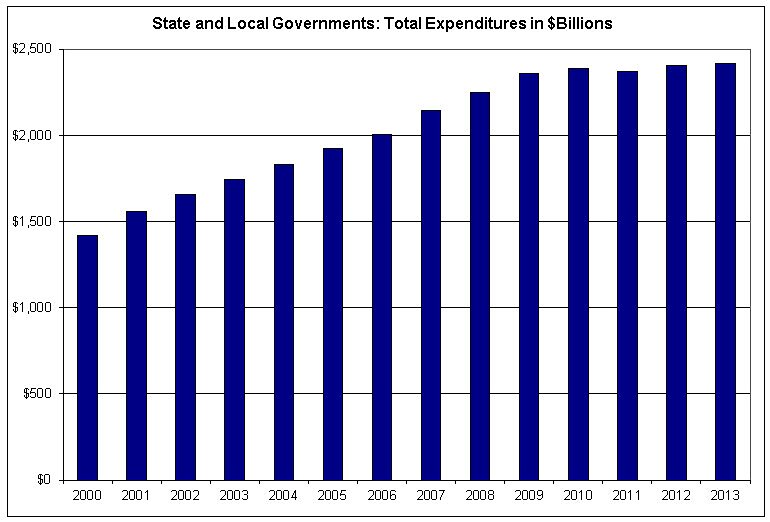 On employment, Bernanke resorts to the convoluted statistic of 1.3 million and provides no context. Total employment at all levels of government is available here from the BLS. In November, there were 21.9 million government workers in the United States. As Bernanke notes, that is down about 700,000 since the end of 2009. But that’s only a cut of three percent, which surely is not “highly contractionary.”


Besides, the government worker reduction is “contractionary” to Keynesians in the sense that wage payments are ended for 700,000 workers. But those aggregate wage payments are tiny in the $17 trillion U.S. economy. If those workers had earned, on average, say $60,000 a year, that amounts to only $42 billion less in government spending. And those wages are part of overall state/​local spending, which the chart showed has been flat, not declining.


The bottom line is that efforts by Keynesian economists to blame the slow U.S. recovery on government fiscal contraction is not supported by the facts, even if such a theory made any sense.