Federal Reserve chairmen are famous for their opaque but sophisticated‐​sounding comments designed to make it appear that they know more about the shape of the economy than they really do. But outgoing chairman Ben Bernanke’s direct and transparent assertions yesterday about fiscal policy also left me scratching my head.


In response to a reporter’s question about why the economy has not created more jobs:

Bernanke saw several of the usual reasons: the nature of the financial crisis, the housing bust and trouble in Europe. But he added one more. ‘On the whole, except for in 2009, we’ve had very tight fiscal policy,’ he said. ‘People don’t appreciate how tight fiscal policy has been.’

In the usual (and weird) Keynesian view of the economy, government deficits are stimulative while surpluses are “tight” or destimulative. The following chart (based on CBO) shows that in the four years after 2009, we had $4.4 trillion of federal deficit spending, or supposed Keynesian stimulus. Calling that “very tight fiscal policy” is absurd. 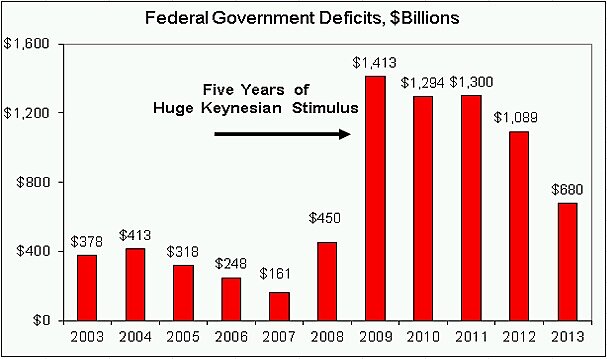