Be Thankful for “Diminished Productivity” in Washington

Let's do a simple thought experiment and answer the following question: Do you think that additional laws from Washington will give you more freedom and more prosperity?

I don't know how you will answer, but I strongly suspect most Americans will say "no." Indeed, they'll probably augment their "no" answers with a few words that wouldn't be appropriate to repeat in polite company.

That's because taxpayers instinctively understand that more activity in Washington usually translates into bigger and more expensive government. And big government isn't so fun for those who pay the bills and incur the costs.

So what's the purpose of our thought experiment? Well, new numbers have been released showing that the current Congress is going to set a modern-era record for imposing the fewest new laws.

But while most of us think this is probably good news, Washington insiders are whining and complaining about "diminished productivity" in Congress. The Washington Post is very disappointed that lawmakers aren't enacting more taxes, more spending, and more regulation.

Just in case you don't have a beltway mindset, another Washington Post report also tells you that fewer laws is a bad thing.

...whatever gets done in December will still be part of a year with record-low congressional accomplishment. ...According to congressional records, there have been fewer than 60 public laws enacted in the first 11 months of this year, so below the previous low in legislative output that officials have already declared this first session of the 113th Congress the least productive ever.

Let's actually look at some evidence. The first session of the current Congress may have been the "least productive" in history when it comes to imposing new laws, but what's the actual result?

Well, there are probably many ways this could be measured, but one of the most obvious benchmarks is the federal budget. 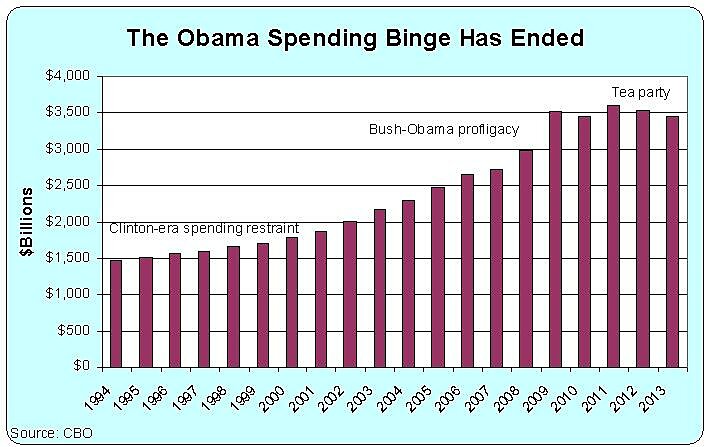 And it appears that "record-low congressional accomplishment" translates into a smaller burden of government spending.

Indeed, government spending actually has declined for two consecutive years. That hasn't happened since the 1950s.

And it's worth reminding people that you begin to solve the symptom of red ink when you address the underlying disease of too much spending. That's why the deficit has fallen by almost 50 percent in the past two years.

Interestingly, the Washington Post accidentally confirms that you get better policy when you have fewer news laws.

In 1995, when the newly empowered GOP congressional majority confronted the Clinton administration, 88 laws were enacted, the record low in the post-World War II era.

Needless to say, the author isn't saying that we got good policy because there were a "record low" number of laws in 1995. But if we look at fiscal policy during that period, that's when we began a multi-year period of spending restraint that led to budget surpluses.

In other words, we should be very grateful for "unproductive" politicians.

Now for some caveats.

It's obviously a gross over-simplification to assert that the number of laws is correlated with good policy or bad policy. Sometimes politicians impose laws that increase the burden of government (with Obamacare being an obvious example).

But sometimes they enact laws that increase economic liberty and reduce government (with the sequester being a good example, even though very few politicians actually wanted that result).

To conclude, the message of this post is that we shouldn't worry about "diminished productivity" in Washington if it means fewer bad laws.

That being said, we'll never fix a corrupt tax code or reform bankrupt entitlement programs unless there are new laws to replace old laws that created bad policy.

P.S. Since we're talking about low productivity in Washington, there's good evidence that bureaucrats don't work very hard compared to workers in the economy's productive sector. But that's probably a good thing. After all, do we want bureaucrats (like this one) being more diligent? That's why we should focus on reducing their excessive compensation rather than encouraging them to put in a full day's work.