Be Skeptical of Income and Wealth Claims

As the 2020 presidential election campaign heats up, get ready for a torrent of claims about incomes, wealth, and inequality. The rich are grabbing all the wealth! The working class is struggling! The middle class never had it so good!


In my op‐​ed yesterday in The Hill, I noted that politicians and pundits are often sloppy or untruthful with data when making such claims. But a different issue is that there are pessimistic and optimistic versions of most income and wealth statistics.


Economist Joseph Stiglitz opted for the pessimistic in his recent New York Times op‐​ed: “Some 90 percent have seen their incomes stagnate or decline in the past 30 years.” That sounds really bad. Stiglitz provided no source for his claim, but shouldn’t we just trust him as a Nobel prizewinner?


Well, no, because a lot of other data sharply conflicts with his unsourced claim.


A recent study by Stephen Rose of the Urban Institute illustrates the wide variation in incomes data, as shown in the table. He compared six scholarly estimates of U.S. real median income growth between 1979 and 2014. The results span a huge range—from an 8 percent decrease to a 51 percent increase in a recent CBO study. Four of the six indicate solid middle‐​class income gains. 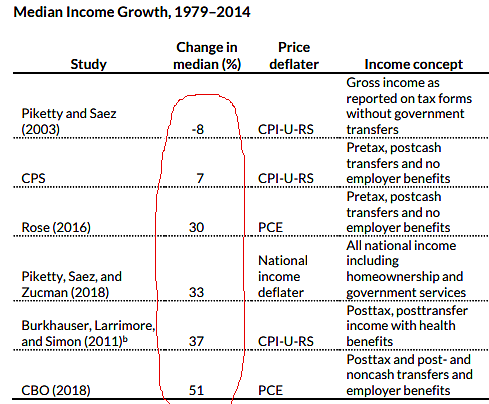 John Early, Ryan Bourne, and I discussed income and wealth issues at a Capitol Hill forum on Monday, which you may view here.