The Balloon Effect in Cocaine Production in the Andes

The Wall Street Journal has a lengthy story today [requires subscription] about the booming cocaine business in Peru, where production has skyrocketed in recent years. The report serves a reminder of the balloon effect in U.S.-led efforts to eradicate cocaine production in the Andean region. Gil Kerlikowske, the Obama administration’s drug czar, has repeatedly pointed out that production in Colombia dropped by 61 percent between 2001 and 2009. But as the graph below illustrates, cocaine manufacturing has just moved back to Peru, which according to some estimates, might already be the world’s largest producer of cocaine: 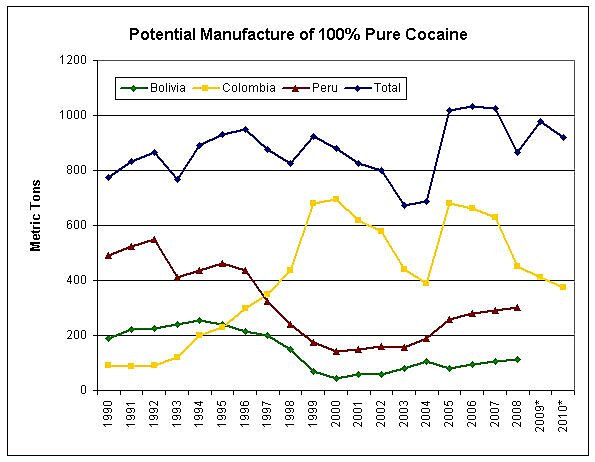 
As we can see, Peru was the world’s largest source of potential cocaine production back in the early 1990s, but production of coca moved to Colombia once the regime of Alberto Fujimori cracked down on drug trafficking. By 2000, Colombia was by far the largest producer. However, due to eradication efforts by then president Álvaro Uribe under the U.S.-sponsored Plan Colombia, production came down in that country. But it didn’t go away, it just moved back to Peru. Overall, the World Drug Report by the UN Office on Drugs and Crime estimates that cocaine production levels in the Andes are pretty much the same as a decade ago.


Mr. Kerlikowske should present the whole picture next time he boasts about declining cocaine production in Colombia.