Last week, The Washington Post reported an “administration official” indicated the Trump White House was considering a new tax on carbon dioxide emissions. This seems incredible for a number of reasons.

It’s never a good time to champion a brand new tax, and recent science developments make it seem an especially bad one. A year ago lower atmospheric temperatures peaked with the big (and natural) El Niño. This temporarily wiped out the recent “pause” in warming that shows up in so many records. But now those temperatures are in rapid decline, with the March satellite readings back down to their pre- El Niño values. If they stay in that range for several months, the pause will be back.

If that happens, there will be no net lower atmospheric warming all the way back to 1994—almost a quarter of a century ago.

Even without another hiatus in warming, the disparity between forecast and observed warming will continue to grow.

People are now beginning to realize that there are other problems with the computer models with serious climate implications. There is a big one lurking in the bottom 50,000 feet of our atmosphere. These models all predict that the upper portion of this zone in the tropics should be warming even more than the surface. But the “tropical hot spot” simply refuses to show, as pointed out last month by University of Alabama’s John Christy, in testimony before the House Science Committee. 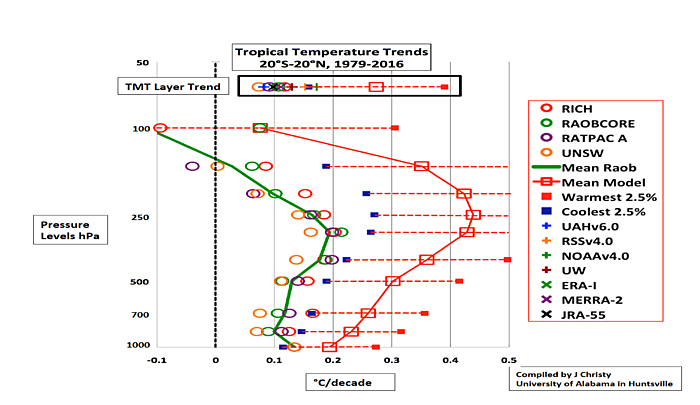 Observed (green) and predicted (red) warming rates from near the surface (bottom of chart) the stratosphere (above the top data point). The difference between predicted and observed changes in the high altitudes are in the range of an entire order of magnitude. The weather implications are discussed in this post.

This is no mere arcane detail. The vertical distribution of temperature is the main cause of tropical rainfall. When the difference between the surface and upper layers is large, the surface air is more buoyant, and rain-producing clouds arc skyward. If the difference is less (as has been erroneously forecast), the opposite occurs, and rainfall is suppressed. Maintained over time, this is the difference between the tropical rainforest, the most diverse ecosystem on earth, and scrubland, savannah, or even a semidesert.

This cascades into another host of errors. Daytime desert temperatures are really hot, often exceeding 120⁰F. In such a dry environment, there’s little moisture to absorb the sun’s rays, and surface temperatures skyrocket. But in a tropical rainforest region, like Manaus, Brazil, near the equator, high temperatures in the hottest month average only around 90⁰.

We are now beginning to realize the likely reason these models are making such humongous errors. As noted in a paper just published in The Bulletin of the American Meteorological Society the climate models have all been “tuned” to give the “right” answer for 20th century climate change, but doing so may have created grave errors in the ultimate forecast products.

The sum-total of all of this science news means that climate gloom-and-doom has been dramatically overforecast. It’s just not a good scientific time to bring up a carbon tax.