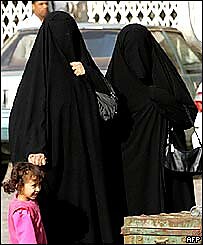 Editors Note: Christopher Preble has just returned from a 9-day trip through Abu Dhabi, Dubai and Riyadh. Catch up on his trip here.

Well, it sure is nice to be home. I was fortunate to have traveled with an exceptional group of American academics. I learned a lot, but it was also nice to get to know them, and to share stories about how our respective institutions deal with different subjects. We were well-received by a number of senior Saudi government officials, a credit to the organizers of this trip. And as for the "people on the street" with whom I came into contact, the hotel staff and random merchants and restaurateurs were very friendly, and, almost without exception, spoke some English. (They also love American -- that is to say Detroit -- cars. I saw more Chevrolets, GMCs, and Fords on the road in Riyadh than I see every day in Northern Virginia.)

Having said all that, I can’t imagine any American ever really being comfortable in the Kingdom. For starters, we gave up on kings a long time ago, and with good reason. Americans might sometimes like the idea of royalty -- they make such great copy for the tabloids, don’t you know -- but we’d be genuinely horrified if a person’s right to rule over others were dictated solely by heredity.

Then there is the issue of women. One need not be an avowed feminist to be put off by the inequities in Saudi society. Perhaps I’d grow accustomed to seeing 50 percent of the population covered from head to toe in black, but I sincerely doubt it. Meanwhile, dress codes are merely the tip of the iceberg when it comes to women’s rights. Many years ago, the U.S. Supreme Court helped us to understand that “separate but equal” is inherently unequal. And the Saudis don’t even aspire to “separate but equal”. The “family” section of the Starbucks next door to our hotel received less attention from the wait staff than the main dining area (women patrons essentially came in through a back door, and were served through the kitchen). The “women only” lines at the food court at the nearby mall were longer than the “men only” ones. Our hotel in Riyadh had a nice workout room…for men only. My female traveling companions were reduced to calisthenics and stretching exercises in their respective (small) hotel rooms.

We heard a number of people trying to explain the rationales for keeping men and women separate. None were convincing.

The best educated there, including especially those who attended schools in the U.S. or U.K., understand that their country cannot progress if the percentage of women in the labor force remains at its current low level (about 15 percent). But public policy isn’t made by the best educated. Meanwhile, there are strong economic incentives at an individual or family level to allow women greater freedom, but these alone will not force a change in policy.

Over dinner one night with several Saudi academics, an IR professor explained how change actually occurs in the Kingdom. There is a lot of debate about different social conventions, especially about the rights of women, he said. The most conservative within the religious hierarchy oppose extending certain rights -- say, for example, to obtain an education -- and then one day the king will say “Women shall be educated.” End of debate. The clerics and imams, after all, derive a paycheck from the government (as does about 80 percent of the total Saudi workforce). This professor predicted that that is how women in the Kingdom will someday be allowed to drive: by decree.

The actual process behind the scenes is  a little more complicated, as the king rules by consensus and must bring along enough of the other senior leaders and the religious conservatives. When the government feels very strong, they are inclined to give in less, but when they are weak they are more constrained.

A far-sighted leader might push his society to embrace some aspect of modernity against its will -- in other words, actually lead -- but he is not immortal. He will inevitably be replaced by a son or brother, perhaps one who would choose simply to undo these reforms, especially if the prior ruler’s policies have never been embraced by the public at large. In short, the 18th century liberals were onto something when they railed against the divine right of kings.

Our forefathers also had the right idea when they articulated other liberties that we now take for granted, from freedom of speech and worship, to the right to own firearms. Others came along after the founding generation extending rights to women, and to religious and ethnic minorities. Today, most Americans take for granted that these rights cannot be denied to anyone on the basis of gender, race, religion, or sexual orientation.

Other countries do not presuppose that their citizens have such rights; rights are something parceled out by the government, or not at all. As a libertarian, I can’t imagine ever wanting to live in any such place, but I’m doubtful that talented, entrepreneurial non-libertarian women, for example, will ever want to invest or work in Saudi Arabia. I’m equally skeptical that large numbers of Western men -- the fathers of women and husbands of women -- will want to do so, either. Some Westerners do live and work in the Kingdom. They are insulated from many of these regulations when at home, but subject to them when they venture out of their compounds. That means they can drink a glass of Chardonnay with dinner in their kitchen, but not at a restaurant.

Wine with dinner isn’t a big deal. The other stuff is: The knock on the door in the middle of the night. The visits to journalists who get a little too interested in particular stories. The intrusive police state and draconian punishments for relatively minor crimes. “Due process” in the Kingdom has a meaning all its own.

I predict that countries (not just Saudi Arabia) that do not afford full legal rights to all citizens will inevitably bump up against a glass ceiling. Unable to attract the best and brightest, and unwilling to allow their own people to advance to the full extent of their ability, the society will stagnate. And when the oil money dries up, they will be left with what they had before oil: namely, not much.

Many of the Saudis with whom we met seemed genuinely interested in improving the lives of Saudi citizens, and in moving beyond an economy based on oil extraction. I hope, for the sake of the people of Saudi Arabia, that they succeed. In the coming years, I’ll be watching the statistics about Saudi competitiveness (28th according to the World Economic Forum, pdf). I’ll check the World Bank’s annual “ease of doing business” reports (SA ranked 13th in 2009). And, as always, I’ll read the indices of economic liberty (The latest Heritage-Wall Street Journal index ranked the Kingdom 65th). Notably, the Economic Freedom of the World Index doesn’t include Saudi Arabia given the lack of reliable statistics that can be easily compared with other countries.

But even reliable data can only tell so much. Another indicator of whether Saudi Arabia has truly changed will be the percentage of American students wishing to study in Saudi Arabia, and of Americans who want to work there. Today, those numbers are very small, while the number of Saudis wishing to come here is very large. I think that says a lot.