Austan Goolsbee, the former Chairman of President Obama’s Council of Economic Advisers, had a column in the Wall Street Journal that argues government spending isn’t too high.


That’s obviously a silly assertion, as I explain here, here, and here, but I want to focus on what he wrote about tax revenues.


Here’s the relevant passage from his column.

The true fiscal challenge is 10, 20 and 30 years down the road. An aging population and rising health‐​care costs mean that spending will rise again and imply a larger size of government than we have ever had but with all the growth coming from entitlements—while projected federal revenues as a percentage of GDP after the rate cuts of the 2000s will likely remain below even historic levels of 18%.

He’s right that the main problem is in the future. As I’ve noted before, America is doomed to become Greece because of rising entitlement spending.


But he’s completely wrong when he implies that the problem is because taxes will stay below the long‐​run average of 18 percent of economic output. Here’s a chart I posted last year showing that tax receipts will soon rise above the long‐​tun average — even if the 2001 and 2003 tax cuts are made permanent. And these numbers are from the left‐​of‐​center Congressional Budget Office. 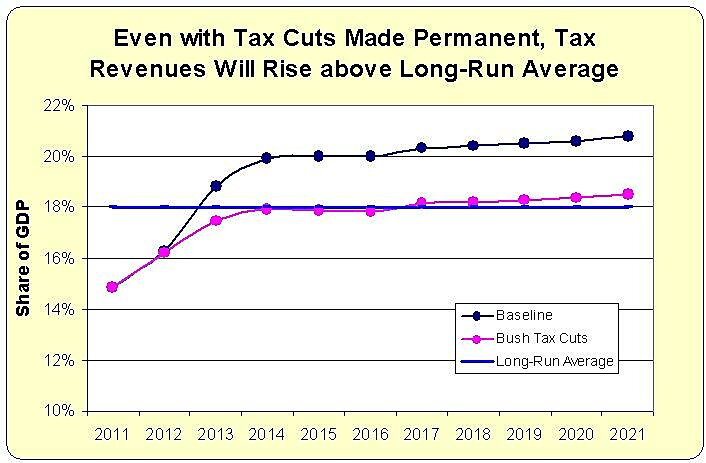 It’s rather shocking that a former Chairman of the Council of Economic Advisers isn’t aware of this CBO data. Or, if he is aware of the data, it’s unseemly that he would deliberately mislead readers.


But let’s set aside any discussion of why Goolsbee made such a fatuous claim about revenue. What really matters is that this is a debate about fiscal policy and the size of government.


The folks on the left want to convince us that inadequate revenue is causing deficits, both in the short run and long run.


We can see that they’re wrong in the short run.


But what’s especially remarkable is that they are wildly wrong about the future. The long‐​run data from the Congressional Budget Office shows that the federal tax burden over the next 70‐​plus years will jump to more than 30 percent of GDP. 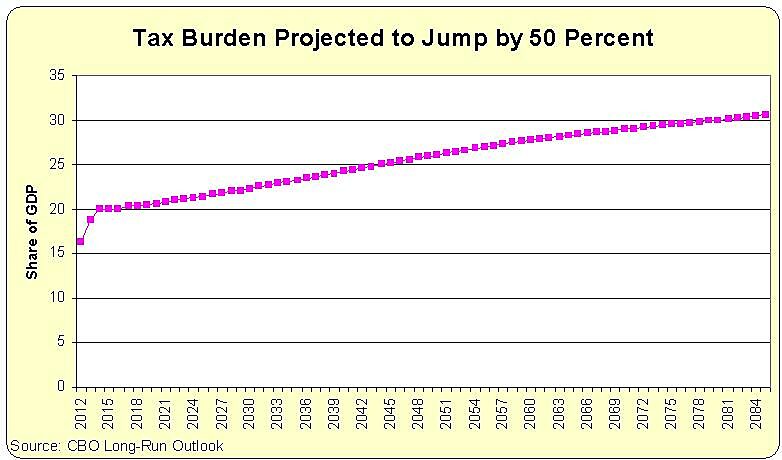 This CBO baseline data assumes the 2001 and 2003 tax cuts expire, so it exaggerates the increase in the future tax burden compared to current policy. But even if you correct for this assumption and reduce tax receipts by about 2‐​percentage points of GDP (and presumably even more than that in the long run), it’s clear that the tax burden will be far above the historical average of 18 percent of GDP.


It’s easy to understand why Goolsbee ignores this data. After all, why report on information that completely debunks the left‐​wing argument about the supposed need to increase the tax burden.


But this isn’t the first time Goolsbee’s been wrong about tax policy. Let’s dig into the 2010 archives and share this video, which takes apart his arguments for class‐​warfare tax policy.

So what’s the bottom line? Well, we know Goolsbee and other leftists are being deceptive about taxation.


But my main takeaway is that I wish the left would be honest and admit that taxes already are projected to increase. And I’d like them to level with the American people and admit that they want the tax burden to climb even faster because they want government to get even bigger.