Are We Sticking Around in Afghanistan to Deny al Qaeda a Talking Point?

Defense Secretary Robert Gates offered some interesting thoughts on the war in Afghanistan last night in a talk at DC’s George Washington University. As Adam Rawnsley notes, Gates says we need to stay in Afghanistan because al Qaeda will get a propaganda win if we leave:

The Afghanistan‐​Pakistan border area, Gates said, represents the “modern epicenter of jihad.” A place “where the Mujahedeen defeated the other superpower,” and in his estimation of the Taliban’s thinking, “they now have the opportunity to defeat a second superpower.”


Defining al‐​Qaeda as both an ideology and an organization, Gates said their ability to successfully “challenge not only the United States, but NATO — 42 nations and so on” on such a symbolically important battlefield would represent “a hugely empowering message” for an organization whose narrative has suffered much in the eight years since 9/11.

This is tantamount to saying we have to stay in Afghanistan because we’re in Afghanistan. The recent evidence on this sort of thing is not encouraging. Recall, for example, that Israel spent almost 40 years in possession of the Gaza Strip. Ariel Sharon decided to pull Israelis out of the Gaza Strip in 2005, unilaterally. When that happened, Khaled Meshaal, the leader of Hamas, was all smiles. 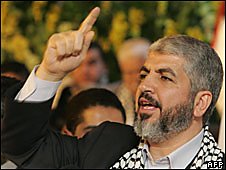 Despite the time that had passed, despite the wreckage in Gaza, Meshaal sneered that the pullout constituted “the beginning of the end for the Zionist program in the region.” He went on to say “it is unthinkable that our people will renounce the resistance, which made the enemy retreat. This is our only guarantee to force the enemy to withdraw from the other territories.”


Now that’s a “hugely empowering message,” to use Gates’ term. But what it shows is that it is virtually impossible to do enough damage to a group like al Qaeda — or Hamas — that prevents it from claiming a propaganda victory once you leave somewhere. Issuing press releases and crowing isn’t very hard.


Propaganda aside, though, the underlying material reality is unchanged. The withdrawal from Gaza did not, of course, signal anything like “the beginning of the end for the Zionist program in the region.” Hamas may try to use terrorism to “force the enemy to withdraw from the other territories,” but it’s far from clear that’s actually going to work.


That is to say, Gates is being a bit too postmodern for my tastes here. We have interests. We should make clear that we will defend them. Then, we should defend them. But to say that we’re so concerned about lending al Qaeda a propaganda victory that we can’t leave Afghanistan is a bridge too far. There will always be somebody to declare victory for al Qaeda, whether we leave Afghanistan next year or 20 years from now. Staying until you feel comfortable no one can claim a moral victory as we depart is a recipe for staying forever.