Are We Really Going to Leave Iraq? (part III) 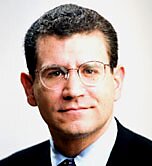 
Oh, and it’s not just Iraq. “Like Iraq, Afghanistan will require roughly 50,000 U.S. combat troops, probably rebadged as advisors, for many more years before it is able to stand on its feet.”


It seems cruelly ironic that Pollack, whose most recent book is titled A Path Out of the Desert, seems only to have a bottomless stack of plans to keep America stuck on the treadmill in the desert he urged us onto more than seven years ago.


I’ve only skimmed the piece, so maybe there’s more going on here, but this drip, drip, drip of Beltway elites urging the president to stick around for several more years is cause for alarm. (And cause for me to start thinking about drawing up odds about whether we’re going to actually leave.)


Keep in mind, the president doesn’t have anybody who vocally opposed the Iraq war in the upper echelons of his administration, so there likely is nobody on hand to challenge the logic that “success in Iraq is vital to U.S. interests.” It’s like it’s 2002 all over again. With the economy in the front of the president’s brain, he seems much more likely to outsource foreign policy decisions to Hillary Clinton, Joe Biden, and the gaggle of “strategic class” foreign policy elites they brought into office with them. And the American people seem less likely to punish him if he does so.