Apple: Too Big Not to Nail

In Sunday’s New York Daily News, I deplore the efforts of politicians and regulators to drag successful companies into the parasite economy of Washington, the most recent example being Apple. As the article says,

Heard of “too big to fail”? Well, to Washington, Apple is now too big not to nail.

I was prompted to these reflections by a recent article in Politico. The Wall Street Journal used to call itself “the daily diary of the American dream.” Politico is the daily diary of the rent‐​seeking class. And that class is very upset with Apple for not hiring many lobbyists, as illustrated by Politico’s front‐​page cartoon: 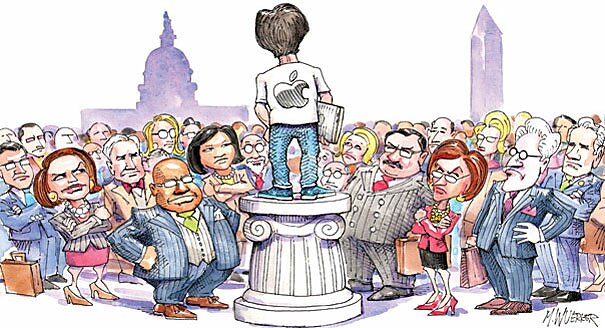 Apple is taking a bruising in Washington, and insiders say there’s a reason: It’s the one place in the world where the company hasn’t built its brand.


In the first three months of this year, Google and Microsoft spent a little more than $7 million on lobbying and related federal activities combined. Apple spent $500,000 — even less than it spent the year before.

The nerve of them! How do they expect lobbyists to feed their families? Then comes my favorite part:

The company’s attitude toward D.C. — described by critics as “don’t bother us” — has left it without many inside‐​the‐​Beltway friends.

“Don’t bother us”—yes! Don’t tread on me. Laissez nous faire. Leave us alone. Just let us sit out here in Silicon Valley, inventing cool stuff and distributing it to the world. We won’t bother you. Just don’t bother us.


But no pot of money can be left unbothered by the regulators and rent‐​seekers.

Apple is mostly on its own when the Justice Department goes after it on e‐​books, when members of Congress attack it over its overseas tax avoidance or when an alphabet soup of regulators examine its business practices.

And what does the ruling class say to productive people who try to just avoid politics and make stuff? Nice little company ya got there, shame if anything happened to it:

“I never once had a meeting with anybody representing Apple,” said Jeff Miller, who served as a senior aide on the Senate Judiciary Committee’s Antitrust Subcommittee for eight years. “There have been other tech companies who chose not to engage in Washington, and for the most part that strategy did not benefit them.”

As I noted in the Daily News, back in 1998 Microsoft was in the same situation—a successful company on the West Coast, happily ignoring politics, getting too rich for politics to ignore it—and a congressional aide told Fortune’s Jeff Birnbaum, “They don’t want to play the D.C. game, that’s clear, and they’ve gotten away with it so far. The problem is, in the long run they won’t be able to.” All too true.


Watch out, aspiring entrepreneurs. You too could become too big not to nail.