Remember back in 2009, when President Obama and his team told us that we needed to spend $800 billion on a so-called stimulus package?

The crowd in Washington was quite confident that Keynesian spending was going to save the day, even though similar efforts had failed for Hoover and Roosevelt in the 1930s, for Japan in the 1990s, and for Bush in 2008.

Nonetheless, we were assured that the stimulus was needed to keep unemployment from rising above 8 percent.

Well, that claim has turned out to be hollow. Not that we needed additional evidence, but the new numbers from the Labor Department re-confirm that the White House prediction was wildly inaccurate. The 8.2 percent unemployment rate is 2.5 percentage points above the administration's prediction. 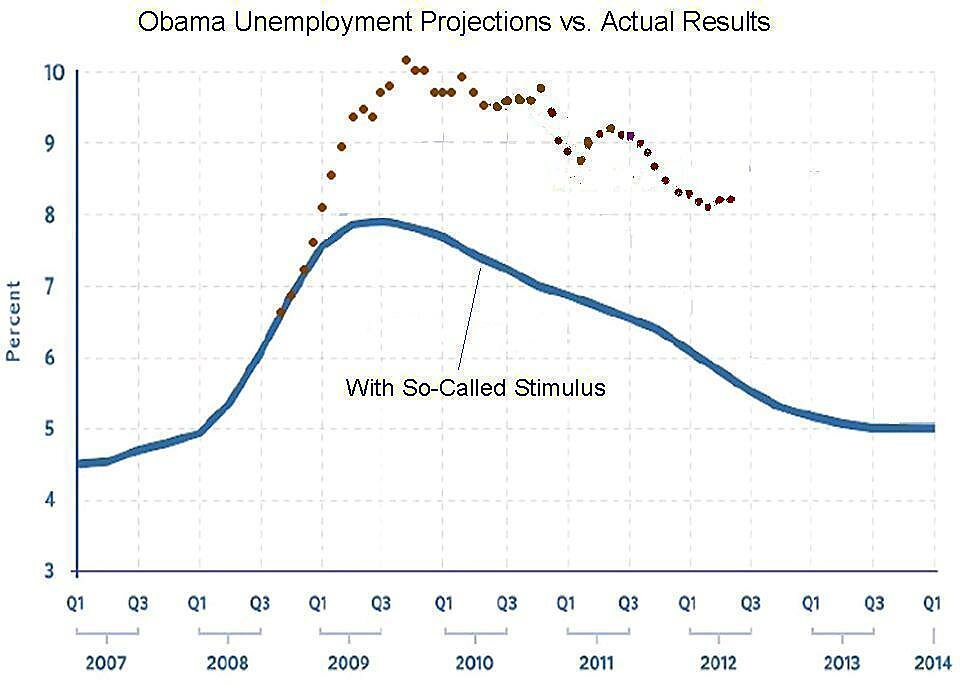 Defenders of the Obama administration sometimes respond by saying that the downturn was more serious than anyone predicted. That's a legitimate point, so I don't put too much blame on the White House for the initial spike in joblessness.

But I do blame them for the fact that the labor market has remained weak for such a long time. The chart below, which I generated this morning using the Minneapolis Fed's interactive website, shows employment data for all the post-World War II recessions. The current business cycle is the red line. As you can see, some recessions were deeper in the beginning and some were milder. But the one thing that is unambiguous is that we've never had a jobs recovery as anemic as the one we're experiencing now. 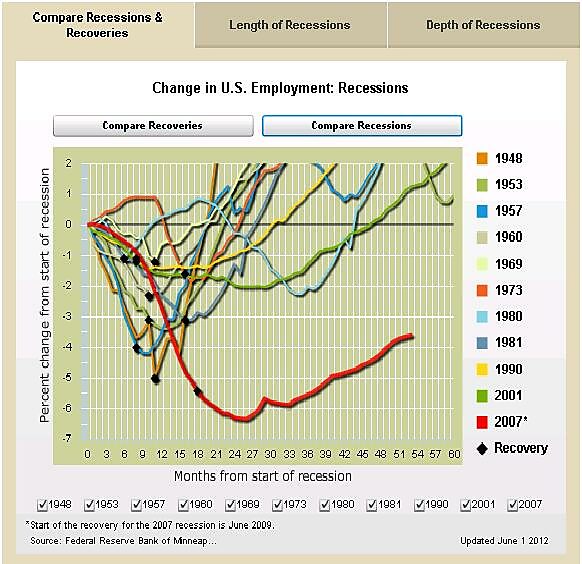 Job creation has been extraordinarily weak. Indeed, the current 8.2 percent unemployment rate understates the bad news because it doesn't capture all the people who have given up and dropped out of the labor force.

By the way, I don't think the so-called stimulus is the main cause of today's poor employment data. Rather, the vast majority of that money was simply wasted.

Today's weak job market is affected by factors such as the threat of higher taxes in 2013 (when the 2001 and 2003 tax cuts are scheduled to expire), the costly impact of Obamacare, and the harsh regulatory environment. This cartoon shows, in an amusing fashion, the effect these policies have on entrepreneurs and investors.

Postscript: Click on this link if you want to compare Obamanomics and Reaganomics. The difference is astounding.

Post-postscript: The president will probably continue to blame "headwinds" for the dismal job numbers, so this cartoon is definitely worth sharing.