Andrew Sullivan Has No Idea What He’s Talking about, but I Agree with His Conclusion

Even though he's become more partisan in recent years, I still enjoy an occasional visit to Andrew Sullivan's blog. But I was disappointed last night when I read one of his posts, in which he discussed whether government spending helps or hurts economic performance. He took the view that a bigger public sector stimulates growth, and criticized those who want to reduce the burden of government spending, snarkily observing that, "The notion that Herbert Hoover was right has become quite a dogged meme on the reality-challenged right."

Since I'm one of those "reality-challenged" people who prefer smaller government, I obviously disagree with his analysis. But his reference to Hoover set off alarm bells. As I have noted before, Hoover increased the burden of government during his time in office.

But maybe my memory was wrong. So I went to the Historical Tables of the Budget and looked up the annual spending data. As you can see from the chart (click for larger image), it turns out that Hoover increased government spending by 47 percent in just four years. (If you adjust for falling prices, as Russ Roberts did at Cafe Hayek, it turns out that Hoover increased real government spending by more than 50 percent.) 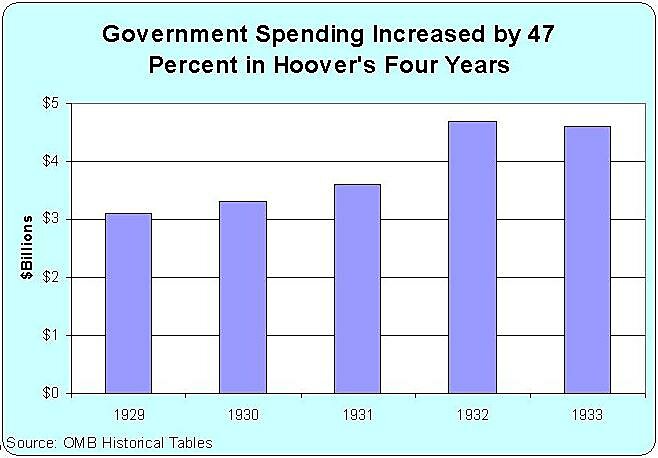 I suppose I could make my own snarky comment about being "reality-challenged," but Sullivan's mistake is understandable. The historical analysis and understanding of the Great Depression is woefully inadequate, and millions of people genuinely believe that Hoover was an early version of Ronald Reagan.

I will say, however, that I agree with Sullivan's conclusion. He closed by saying it would be "bonkers" to replicate Hoover's policies today. I might have picked a different word, but I fully subscribe to the notion that making government bigger was a mistake then, and it's a mistake now.