Amtrak responded to Biden’s “American Jobs Plan,” which would give Amtrak $80 billion (presumably over several years), with a “vision to grow rail service and connect new city pairs across America.” As shown in the map below, some of those city pairs might seem to make sense, such as Dallas‐​Houston and Los Angeles‐​Las Vegas. 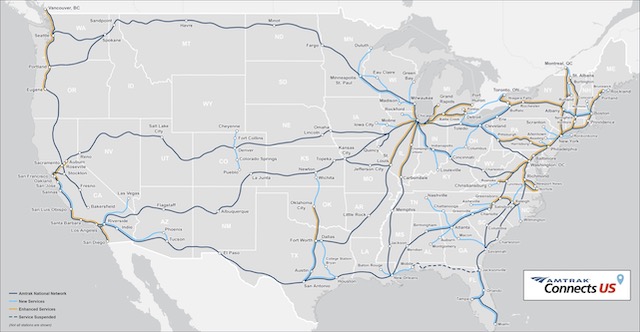 But a lot of the cities being added to the map are so small — places like Rockland, Maine (7,500 people), Christiansburg, Virginia (25,000), and Cheyenne (76,000) — that even Amtrak lovers are skeptical. Matthew Yglesias, for example, says “Amtrak’s big idea of what to do with extra funding is to create new low‐​performing extensions to places with very low demand.”

In Amtrak’s vision, Cheyenne gets a train to Denver, as does Pueblo, whose urban‐​area population was 142,000. Duluth, with a population of 118,000, gets a train to the Twin Cities. Iowa City; Mobile & Montgomery, Alabama; Allentown, Reading, and Scranton, Pennsylvania; and Asheville and Wilmington, North Carolina will all be terminuses for new trains. Other trains will parallel existing trains to serve cities like Phoenix, Eau Claire, and Madison. Phoenix makes sense, if anything on this map makes sense, but Eau Claire has barely more than 100,000 people.

Of course, Amtrak isn’t promising to expand service to every city shown on this map if Congress gives it $80 billion. Most of that $80 billion would go to replacing or rehabilitating infrastructure in the Northeast Corridor. I’m pretty sure that Amtrak really wants to get the states to fund many of the light blue lines on the map.

But Amtrak also wants to expand the number of communities that will say they are dependent on it. It currently has no trains at all into Wyoming; adding a line to Cheyenne will potentially get it two more votes in the Senate. Adding a line to Louisville will help in the Bluegrass state as currently its only stop in Kentucky is in Paducah, an important town for rail history but which has only about 25,000 people.

Even Dallas‐​Houston or Los Angeles‐​Las Vegas trains don’t really make sense. These routes are so heavily covered by airlines, buses, and freeways that a passenger train is not going to attract many customers.

Amtrak’s last train from Los Angeles to Las Vegas took 6 hours and 50 minutes for an average speed of 50 miles per hour. Today, four different bus companies offer Los Angeles‐​Las Vegas service with buses roughly every half hour taking as little as 5 hours and 10 minutes at fares starting at $20. Eight different airlines offer Los Angeles‐​Las Vegas service with 70- to 80‐​minute flights roughly every half hour at fares that also start at, believe it or not, $20. Where is Amtrak going to fit into this market?

Amtrak argues that it “lowers carbon emissions” and “addresses the climate crisis.” But buses emit far less greenhouse gases per passenger mile than Amtrak’s Diesel‐​powered trains, and the trains do only slightly better than airliners. In 2019, Amtrak’s Diesels used 9 trillion BTUs carrying a little less than 4 billion passenger miles. Using standard factors, that works out to about 167 grams of carbon dioxide per passenger‐​mile. Buses emit only about 60 grams per passenger mile. The airlines emit about 174 grams per passenger‐​mile, but before the pandemic they were improving faster than Amtrak. I suspect that air travel will recover more than train travel so that, after the pandemic is but a distant nightmare, flying will be greener than Amtrak.

In its eagerness to expand its empire, Amtrak is hoping that everyone forgets that its ridership is down by 74 percent. While companies in the private sector try to reshape their businesses to gain back customers lost during the pandemic, Amtrak is simply trying to get more subsidies to make up for passenger revenues that will probably never recover to what they were in 2019.