The folks at Americans for Tax Reform have received a bunch of attention for a new report entitled "Win Olympic Gold, Pay the IRS."

In this clever document, they reveal that athletes could face a tax bill - to those wonderful folks at the IRS - of nearly $9,000 thanks to America's unfriendly worldwide tax system.

The topic is even getting attention overseas. Here's an excerpt from a BBC report.

US medal-winning athletes at the Olympics have to pay tax on their prize money - something which is proving controversial in the US. But why are athletes from the US taxed when others are not? The US is right up there in the medals table, and has produced some of the finest displays in the Olympics so far. ... But not everyone is happy to hear that their Olympic medal-winning athletes are being taxed on their medal prize money. Athletes are effectively being punished for their success, argues Florida Senator Marco Rubio, a Republican, who introduced a bill earlier this week that would eliminate tax on Olympic medals and prize money. ...This, he said, is an example of the "madness" of the US tax system, which he called a "complicated and burdensome mess".

It's important to understand, though, that this isn't a feel-good effort to create a special tax break. Instead, Senator Rubio is seeking to take a small step in the direction of better tax policy.

More specifically, he wants to move away from the current system of "worldwide" taxation and instead shift to "territorial" taxation, which is simply the common-sense notion of sovereignty applied to taxation. If income is earned inside a nation's borders, that nation gets to decided how and when it is taxed. 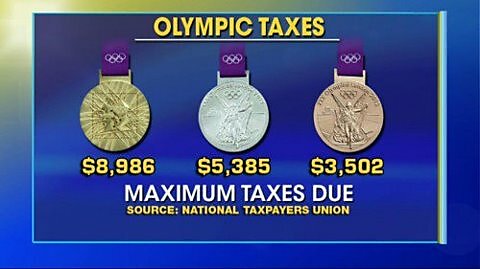 In other words, if U.S. athletes earn income competing in the United Kingdom, it's a matter for inland revenue, not the IRS.

Incidentally, both the flat tax and national sales tax are based on territorial taxation, and most other countries actually are ahead of the United States and use this approach. The BBC report has further details.

The Olympic example highlights what they regard as the underlying problem of the US' so-called "worldwide" tax model. Under this system, earnings made by a US citizen abroad are liable for both local tax and US tax. Most countries in the world have a "territorial" system of tax and apply that tax just once - in the country where it is earned. With the Olympics taking place in London, the UK would, in theory, be entitled to claim tax on prize money paid to visiting athletes. But, as is standard practice for many international sporting events, it put in place a number of tax exemptions for competitors in the Olympics - including on any prize money. That means that only athletes from countries with a worldwide tax system on individual income are liable for tax on their medals. And there are only a handful of them in the world, says Daniel Mitchell, an expert on tax reform at the Cato Institute, a libertarian think tank - citing the Philippines and Eritrea as other examples. But with tax codes so notoriously complicated, unravelling which countries would apply this in the context of Olympic prize money is a tricky task, he says. Mitchell is a critic of the worldwide system, saying it effectively amounts to "double taxation" and leaves the US both at a competitive disadvantage, and as a bullyboy, on the world stage. "We are the 800lb (360kg) gorilla in the world economy, and we can bully other nations into helping enforce our bad tax law."

To close out this discussion, statists prefer worldwide taxation because it undermines tax competition. This is because, under worldwide taxation, individuals and companies have no ability to escape high taxes by shifting activity to jurisdictions with better tax policy.

Indeed, this is why politicians from high-tax nations are so fixated on trying to shut down so-called tax havens. It's difficult to enforce bad tax policy, after all, if some nations have strong human rights policies on privacy.

For all intents and purposes, a worldwide tax regime means the government gets a permanent and global claim on your income. And without having to worry about tax competition, that "claim" will get more onerous over time.

P.P.S. The International Olympic Committee apparently insisted that London couldn't host the games unless the UK government agreed not to tax any of the athletes on their winnings.