Americans Are Not Convinced of Top Down Economics

Several recent polls have shown Americans are becoming increasingly skeptical of Washington’s economic planning capabilities. According to a recent Washington Post poll, 73 percent of Americans doubt Washington’s ability to solve economic problems. In fact, these numbers have leapt from 52 percent last year and from 41 percent in 2002. It appears that the more the government has tried to fix the U.S. economy, the less confident Americans are that the government is capable of doing such things.

When the government in Washington decides to solve economic problems, how much confidence do you have that the problem actually will be solved: A lot, some, just a little, or none at all? 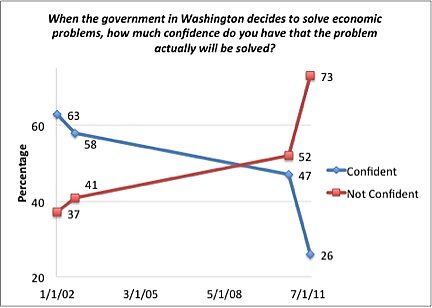 Another example of this skepticism toward government economic planning comes from a recent Rasmussen poll finding that 71 percent of Americans believe the private sector is better than the government at determining technological potential.

Who is better at determining the long-term benefits and potential of new technologies, private sector companies and investors or government officials?

This suggests the public is not convinced that President Obama’s “investment” spending will necessarily be properly directed to its most useful ends. For example, in the president’s 2011 State of the Union address, he marshals the word “invest” or “investment” 13 times, with 8 specifically referencing government investment. It is important to remember that when government “invests” in the economy, it requires officials to make decisions about who gets funding. This presupposes that the government has the knowledge to know which technologies have the greatest potential and thus are worthy of investment. Instead of letting billions of individuals work through a marketplace to best allocate resources to the technologies with the greatest potential, this would instead rely on a small, centralized group of intellectuals deciding who gets what.

4 percent: Not at all likely

It might be time to rethink the alluring sound of government “investment” and reevaluate the merits that government has the knowledge necessary to make these sorts of economic decisions.