Since I’ve written before about Canada’s remarkable period of fiscal restraint during the 1990s, I was very pleased to see that the establishment press is finally giving some attention to what our northern neighbors did to reduce the burden of government spending.


Here are some key passages from a Reuters story.

“Everyone wants to know how we did it,” said political economist Brian Lee Crowley, head of the Ottawa‐​based think tank Macdonald‐​Laurier Institute, who has examined the lessons of the 1990s. But to win its budget wars, Canada first had to realize how dire its situation was and then dramatically shrink the size of government rather than just limit the pace of spending growth. It would eventually oversee the biggest reduction in Canadian government spending since demobilization after World War Two. …The turnaround began with Chretien’s arrival as prime minister in November 1993, when his Liberal Party — in some ways Canada’s equivalent of the Democrats in the U.S. — swept to victory with a strong majority. The new government took one look at the dreadful state of the books and decided to act. “I said to myself, I will do it. I might be prime minister for only one term, but I will do it,” said Chretien. …The Liberals thought their first, rushed budget — delivered in February 1994, three months after taking office, was tough. It reformed unemployment insurance entitlements, and cut defense and foreign aid… The upstart Reform Party, then the main national opposition party, had campaigned on “zero‐​in‐​three” — balance the budget in three years. “We were always trying to go faster,” said Reform’s leader at the time, Preston Manning. …The Liberals were stung by the criticism and, at first reluctantly but then with gusto, they got out the chain saws. …Cutting government spending programs went against the Liberal grain. Contrary to the Reform Party, the Liberals saw a more important role for government. Paul Martin now has a lasting reputation as the finance minister who slayed Canada’s deficit, but the conversion from spender to cutter was painful. His father, also called Paul, had helped create Medicare, Canada’s publicly funded health care system, and suddenly here was Paul Junior contemplating massive cuts.

This is a remarkable story. My only real quibble is that the fiscal restraint actually started the year before the Liberal Party took power, as the chart illustrates. 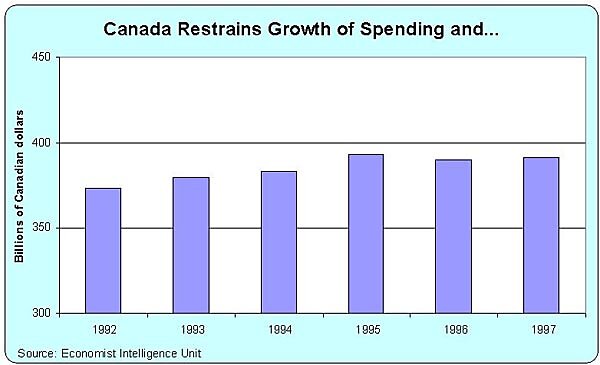 But the key thing to understand is that Canada enjoyed a five‐​year period when government spending increased by an average of only 1 percent each year.


There are more good passages in the story. Can anybody imagine Obama doing this?

At one 1994 cabinet meeting, Martin announced a spending freeze. A minister put forward a project that needed funding but Chretien cut him off, reminding him of Martin’s freeze. A second minister raised his hand to ask for funding, and a testy Chretien told the cabinet that the next minister to ask for new money would see his whole budget cut by 20 percent. …The ratio of spending cuts to tax hikes was seven‐​to‐​one. Asked why, Chretien said simply: “There was more need on one side than the other.” …Cuts ranged from five percent to 65 percent of departmental budgets.

By the way, while there were a few tax hikes implemented, they were trivial. Tax revenue as a share of GDP rose from 44.2 percent of GDP to 44.5 percent a GDP, an increase that probably was going to happen anyhow as Canada’s economy recovered.


So what were the results of Canada’s spending freeze? 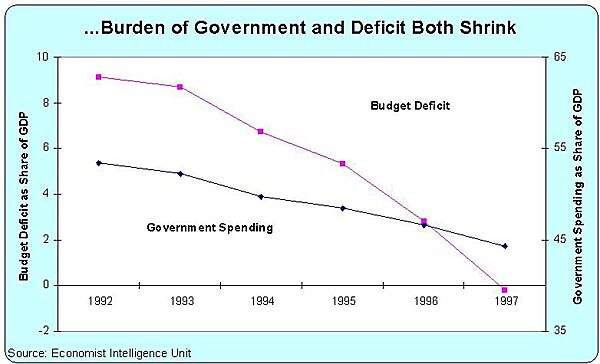 The following passage has some numbers, but the second chart shows that the burden of government spending in Canada (right axis) fell from 53 percent of GDP to 44 percent of GDP in just five years. And red ink (left axis) completely disappeared.

The deficit disappeared by 1997 and the debt‐​to‐​GDP ratio began a rapid decline — it is now at about 34 percent. …After wrestling the deficit to the ground, Canada enjoyed what Crowley calls the payoff decade, outperforming the rest of the G7 on growth, job creation and inward investment. From 1997 to 2007, it averaged 3.3 percent economic growth. while U.S. growth averaged 2.9 percent.

The most important thing to understand is that Canada’s economy improved because the burden of government spending was reduced. Moreover, because the underlying disease was being treated, this meant two of the symptoms of excessive government — deficits and debt — also became less of a problem.


Last but not least, there are rewards for good policy. Just as Reagan enjoyed a landslide in 1984 after sticking to his guns, Canada’s Liberal Party also reaped the benefits of doing the right thing.

The final lesson is that you can impose painful spending cuts and still win elections. Chretien went on to win two more back‐​to‐​back to form majority governments, a rare feat. „,Drummond, who later moved to the private sector and is now an advisor helping the Ontario provincial government slash its deficit, noted that governments on the right and left in Saskatchewan, Alberta and Ontario won more voter support after their own budget cuts in the 1990s.

Here’s a video I narrated that looks at the Canadian experience, as well as similar good reforms in New Zealand, Ireland, and Slovakia.

Last but not least, let’s put all of this in context. As demonstrated here, the U.S. would enjoy a balanced budget in just eight years if politicians could be convinced to limit spending so that it increased by 1 percent each year.