The blogosphere has been buzzing with a debate on whether America or Europe is more prosperous. A partial list of contestants includes Jim Manzi, Paul Krugman, Matt Welch, Megan McArdle, Matthew Yglesias,  and Tino (don't know who he is, but his blog has lots of good info).

I've addressed this issue in the past, with detailed comparisons in my Cato study on the Nordic Model, as well as a paper for the Heritage Foundation looking at Fiscal Policy Lessons from Europe.

I'm frankly shocked when people claim Europe is as rich as the United States, for the simple reason that the data showing otherwise is so abundant. The following charts, both from presumably impeccable sources, should be more than enough to end the argument. The first one is from OECD data (see page 6), showing average individual consumption per capita. I compare America to the EU-15 (Western Europe), but then also add Norway and Switzerland to the mix to boost the European score. 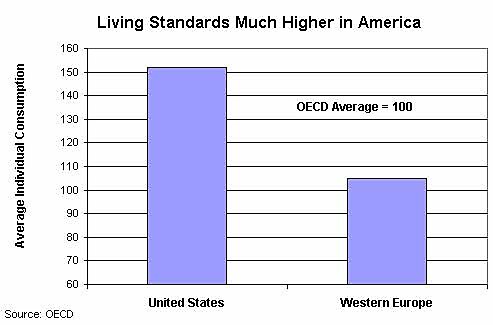 The next bit of data comes from a Danish Finance Ministry study (see page 3), and it shows another measure of individual consumption per capita. Once again, I only look at Western Europe, as defined by the EU-15 plus Norway and Swtizerland. And I even include consumption financed by government transfers. Nonetheless, the gap between U.S. and European living standards is stunning. 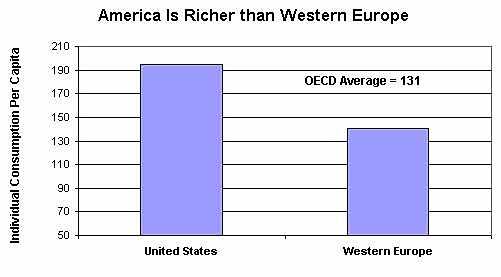 The data for both these charts is from earlier this decade, but as this up-to-date OECD data on economic performance indicates, the United States certainly has not lost any ground relative to Western Europe in recent years. Last but not least, this post is not an attack on Western Europe, which is a very wealthy region by global standards. But the data certainly show that America is even richer. And since the biggest policy difference between the U.S. and Western Europe is the burden of government, this certainly suggests that the Bush-Obama policies of bigger government and more intervention may not be a path to more prosperity.

One final comment. Luxembourg is the one Western European nation that ranks above the United States according to both the OECD and the Danish Finance Ministry. If any statists want to suggest that we mimic Luxembourg's tax haven policies, you can count on my support.