AGU 2014: Quantifying the Mismatch between Climate Projections and Observations

Pat Michaels is in San Francisco this week attending the annual meeting of the American Geophysical Union (AGU) and presenting a poster detailing the widening mismatch between observations of the earth’s temperature and climate model projections of its behavior. Since most global warming concern (including that behind regulatory action) stems from the projections of climate models as to how the earth’s temperature will evolve as we emit greenhouse gases into the atmosphere (as a result of burning fossil fuels to produce energy), it is important to keep a tab on how the model projections are faring when compared with reality. That they are faring not very well should be more widely known—Pat will spread the word while there.

We don’t want those of you who are unable to attend the conference to think you are missing out on anything, so we have reformatted our poster presentation to fit this blog format (it is available in its original format here).

To the extent that the recent literature produces a more accurate estimate of the equilibrium climate sensitivity than does the climate model average, it means that the projections of future climate change given by both the IPCC and NCA are, by default, some 40% too large (too rapid) and the associated (and described) impacts are gross overestimates. 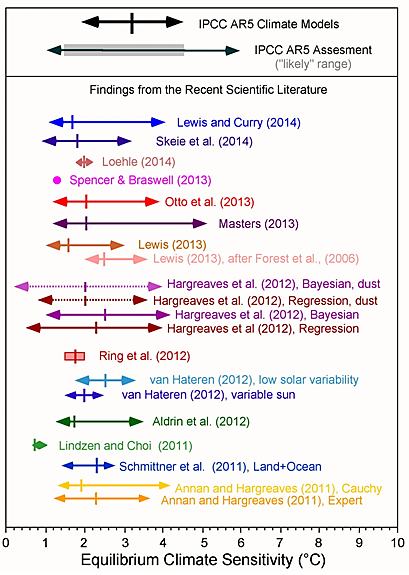 CAPTION: Climate sensitivity estimates from new research beginning in 2011 (colored), compared with the assessed range given in the Intergovernmental Panel on Climate Change (IPCC) Fifth Assessment Report (AR5) and the collection of climate models used in the IPCC AR5. The “likely” (greater than a 66% likelihood of occurrence) range in the IPCC Assessment is indicated by the gray bar. The arrows indicate the 5 to 95 percent confidence bounds for each estimate along with the best estimate (median of each probability density function; or the mean of multiple estimates; colored vertical line). Ring et al. (2012) present four estimates of the climate sensitivity and the red box encompasses those estimates. The right-hand side of the IPCC AR5 range is actually the 90% upper bound (the IPCC does not actually state the value for the upper 95 percent confidence bound of their estimate). Spencer and Braswell (2013) produce a single ECS value best-matched to ocean heat content observations and internal radiative forcing. The mean climate sensitivity (3.2°C) of the climate models used in the IPCC AR5 60% greater than the mean of recent estimates (2.0°C).

A quantitative test of climate model performance can be made by comparing the range of model projections against observations of the evolution of the global average surface temperature since the mid-20th century. Here, we perform such a comparison on a collection of 108 model runs comprising the ensemble used in the IPCC’s 5th Scientific Assessment and find that the observed global average temperature evolution for trend lengths (with a few exceptions) since 1980 is less than 97.5% of the model distribution, meaning that the observed trends are significantly different from the average trend simulated by climate models. For periods approaching 40 years in length, the observed trend lies outside of (below) the range that includes 95% of all climate model simulations. 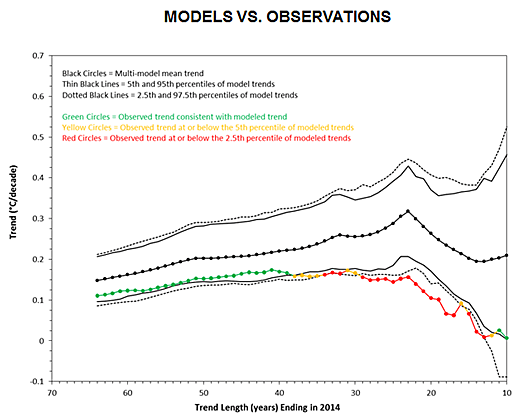 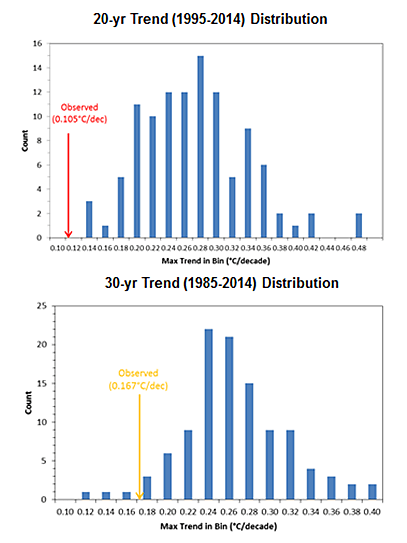 We conclude that at the global scale, this suite of climate models has failed.  Treating them as mathematical hypotheses, which they are, means that it is the duty of scientists to reject their predictions in lieu of those with a lower climate sensitivity.

It is impossible to present reliable future projections from a collection of climate models which generally cannot simulate observed change. As a consequence, we recommend that unless/until the collection of climate models can be demonstrated to accurately capture observed characteristics of known climate changes, policymakers should avoid basing any decisions upon projections made from them. Further, those policies which have already be established using projections from these climate models should be revisited. Assessments which suffer from the inclusion of unreliable climate model projections include those produced by the IPCC and the U.S. Global Climate Change Research Program (including their most recent National Climate Assessment). Policies which are based upon such assessments include those established by the U.S. Environmental Protection Agency pertaining to the regulation of greenhouse gas emissions under the Clean Air Act.

Annan, J.D., and J.C Hargreaves, 2011. On the genera­tion and interpretation of probabilistic estimates of climate sensitivity. Climatic Change, 104, 324-436.

Lindzen, R.S., and Y-S. Choi, 2011. On the observational determination of climate sensitivity and its implica­tions. Asia-Pacific Journal of Atmospheric Science, 47, 377-390.