Agencies Should Not Be Allowed to Ambiguously Interpret Their Ambiguous Interpretations

Arlen and Cindy Foster are farmers in Miner County, South Dakota. Arlen’s grandfather bought the land over a century ago, and the family has been working it ever since. In 1936, Arlen's father planted a tree belt on the south end of the farm as a conservation measure. As the weather warms, the snow around the tree belt melts and the water flows into the circular depression, called a "prairie pothole" (circled in blue on the lower right hand part of the picture). Unfortunately for the Fosters, the federal government has declared that the shallow depression is a protected wetland, and thus denied them the productive use of that portion of their land. 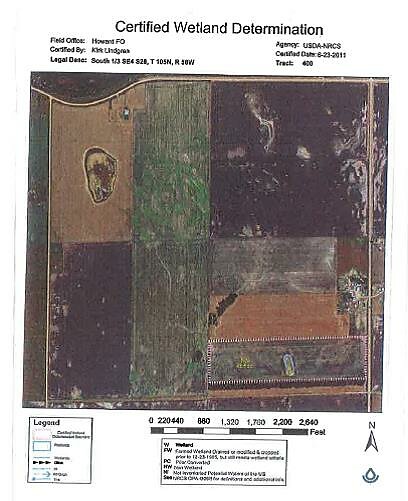 Department of Agriculture regulations define what qualifies as a wetland, but remain vague on some of the details. The regulations say that, if a parcel’s wetland status can’t be determined due to alteration of the vegetation (such as through filling or tilling the land), a similar parcel from the “local area” will be chosen to act as a proxy. “Local area” is never defined, but a 2010 internal field circular refers agency officials to an Army Corps of Engineers manual that uses the parallel language “adjacent vegetation.” Here, the agency interpreted “local area” to refer to an area of almost 11,000 square miles and then selected proxy site some 33 miles from the Fosters’ farm. That proxy site supports wetland vegetation, so the Fosters’ land was also declared a protected wetland.

The Fosters appealed that determination all the way to the Eighth Circuit Court of Appeals, which blindly deferred to the agency’s strained and unnatural interpretation of “local area,” upholding the determination as a reasonable reading of the regulations’ requirements. Now the Fosters are seeking Supreme Court review, and the Cato Institute has filed an amicus brief in support of their petition for certiorari. The Eighth Circuit relied on the 1997 Supreme Court case Auer v. Robbins, which held that courts should give broad deference to an agency’s interpretation of its own regulations. While Auer’s holding has repeatedly been called into question by both the Supreme Court and various lower courts, the Eighth Circuit’s decision goes beyond Auer’s already shaky foundations. The decision actually afforded the agency “second-level” Auer deference, deferring to an interpretation of a vaguely written agency circular that interprets a vague regulation that in turn interprets a vague statute--all to get to a definition of “local area” that is nothing close to a natural and reasonable interpretation of that term.

We argue that Auer should not be extended in this way for several reasons. Since major policy decisions are being made in internal documents with no notice to the public, ordinary people are denied fair warning of what the law requires of them. And since these interpretive decisions are not binding on the agency itself, it is free to change them at any time, again without any notice to the public. Second-level Auer deference also undermines the rule of lenity—a traditional rule of interpretation stating that ambiguity in criminal statutes must be resolved in favor of the defendant—even more than first-level Auer deference already does. It effectively allows agencies to create new crimes (again without notice to the public) by doing as little as reinterpreting a footnote in a memo. Cato urges the Supreme Court take the case so that it may rein in the expansion of Auer deference and make it clear to administrative agencies that they cannot avoid judicial review by refusing to promulgate clear, unambiguous regulations.