The Age and Sex of Criminal Immigrants

In our recent brief on immigrant crime, we focused on the 18 to 54 age range when looking at the incarcerated and non‐​incarcerated populations. This was necessary because the American Community Survey data for weighted responses does not distinguish between the type of group quarters – which are prisons, universities and colleges, mental health facilities, nursing homes, and others.


By narrowing our focus to those in the 18 to 54 age range we were able to cut out about 1.4 million folks in elderly care facilities but only excluded about 206,000 prisoners or about 9.2 percent of the total. Excluding those under the age of 18 also removed most respondents in mental health facilities but only decreased the adult criminal population by 0.2 percent. 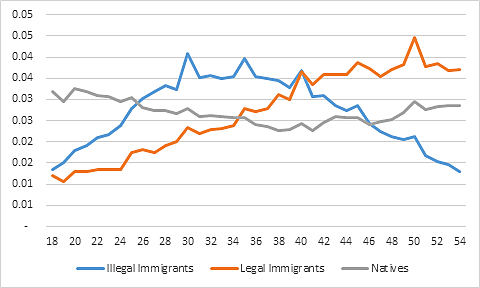 
Figure 2
Characteristics of Prisoners by Sex and Nativity, Ages 18–54