According to Obama’s Budget, Burden of Federal Spending Will Be $2 Trillion Higher in 10 Years

President Obama's budget proposal was unveiled today, generating all sorts of conflicting statements from both parties.

Some of the assertions wrongly focus on red ink rather than the size of government. Others rely on dishonest Washington budget math, which means spending increases magically become budget cuts simply because outlays are growing at a slower rate than previously planned.

When you strip away all the misleading and inaccurate rhetoric, here's the one set of numbers that really matters. If we believe the President's forecasts (which may be a best-case scenario), the burden of federal spending will grow by $2 trillion between this year and 2022. 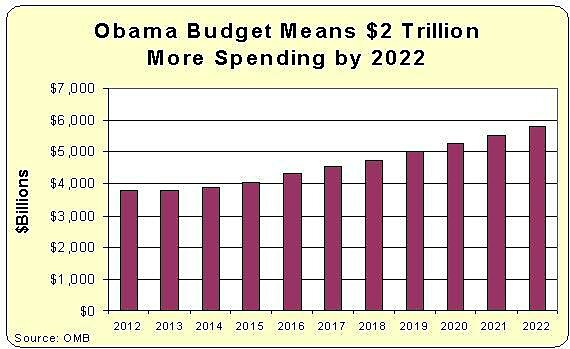 In all likelihood, the actual numbers will be worse than this forecast.

The President's budget, for instance, projects that the burden of federal spending will expand by less than 1 percent next year. That sounds like good news since it would satisfy Mitchell's Golden Rule.

But don't believe it. If we look at the budget Obama proposed last year, federal spending was supposed to fall this year. Yet the Obama Administration now projects that outlays in 2012 will be more than 5 percent higher than they were in 2011.

The most honest assessment of the budget came from the President's Chief of Staff, who openly stated that, "the time for austerity is not today."

With $2 trillion of additional spending (and probably more), that's the understatement of the century.

What makes this such a debacle is that other nations have managed to impose real restraints on government budgets. The Baltic nations have made actual cuts to spending. And governments in Canada, New Zealand, Slovakia, and Ireland generated big improvements by either freezing budgets or letting them grow very slowly.

I've already pointed out that the budget could be balanced in about 10 years if the Congress and the President displayed a modest bit of fiscal discipline and allowed spending to grow by no more than 2 percent annually.

But the goal shouldn't be to balance the budget. We want faster growth, more freedom, and constitutional government. All of these goals (as well as balancing the budget) are made possible by reducing the burden of federal spending.